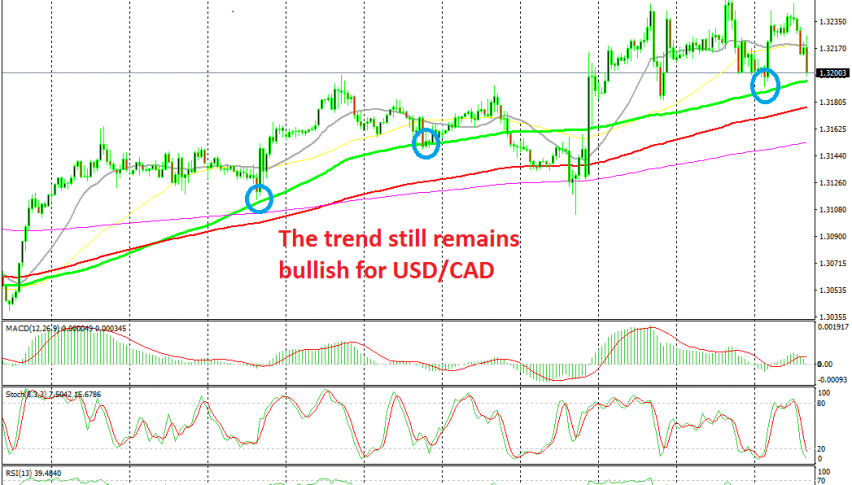 Buying USD/CAD at the 100 SMA As Oil Remains Bearish

The 100 SMA has been keeping the uptrend going

USD/CAD has turned sort of bullish in the last two weeks, following a consolidation month in July, which came after a really bearish month in June. the price has climbed around 250 pips during the past two weeks after bouncing off 1.30 lows which seem to have formed a support zone above the 1.30 level.

The reasons for the Cad turning bearish and USD/CAD turning bullish in the last few weeks have been a few, but most notably due to the market sentiment and the decline in crude Oil prices. The market sentiment has deteriorated as Donald Trump announced new tariffs on $200 billion on Chinese imports to the US, which hurt the risk currencies such as commodity Dollars. Besides that, crude Oil has also turned bearish and lost around $5 in the last few days. Canadian Dollars is positively correlated to Oil, so the decline in Oil prices is also affecting USD/CAD positively.

Although, we have seen a pullback in this pair in the last several hours after the price formed a doji candlestick on the H1 chart, which is a reversing signal. Although, the price has reached the 100 SMA now which has been providing support a few times before when this pair was trending higher. Stochastic is also oversold on this time-frame and crude Oil prices remain bearish, so we decided to buy this pullback on USD/CAD at the 100 SMA.