The US dollar finally gains some support on the release of better than expected Inflation reports. The US CPI figures accelerated in July by 0.3%. The figure posted its strongest two-month gain since early 2006. The consumer-price index, which gauges what the United States pay for items from mutton to motel rooms, expanded a seasonally adjusted 0.3% last month from June, as per reports released by the Bureau of Labor Statistics.

Looking ahead into the economic calendar, the market is likely to follow inflation reports from the United Kingdom along with German Prelim GDP. There are going to be some other economic events, which are likely to keep the market on move. Let’s take a look.

The National Bureau of Statistics of China reports Chinese industrial production figures every month, typically after 15 days of month-end. It shows a change in the total inflation-adjusted value of output produced by manufacturers, mines, and utilities.

As of now, the report has already been released, indicating a massive slowdown in Chinese industrial production. Growth of China’s industrial output stalled much more than anticipated to 4.8% in July from a year earlier, official data revealed.

Fellas, it’s another sign of faltering demand in the world’s second-largest economy as the United States ramps up trade pressure. Indeed the only major reason behind such a drop is the massive amount of tariffs inflicted by the United States on the imports from China. It’s been heavily impacting demand of Chinese products.

Destatis is due to report German Prelim GDP figures during the European open. Slower economic growth, with output in the Eurozone’s top economy scoring -0.1%, is on the cards today. The GDP is likely to drop from 0.4% to -0.1%. Traders, the slower growth in the economy will put pressure on the ECB president Mario Draghi to keep an accommodative monetary policy

The Office for National Statistics is due to report the British inflation rate. The annual inflation rate in the United Kingdom was at 2% in June 2019, consistent with the preceding month and in line with market expectations. Cost of food and non-alcoholic liquors grew considerably while prices decreased for transport and housing & utilities.

A slower CPI data of 1.9% is on the cards for July. Retail Sales are projected to dip by -0.3%, which supports the expected drop in the inflation rate. Weaker inflation figure is considered bearish for the Sterling. 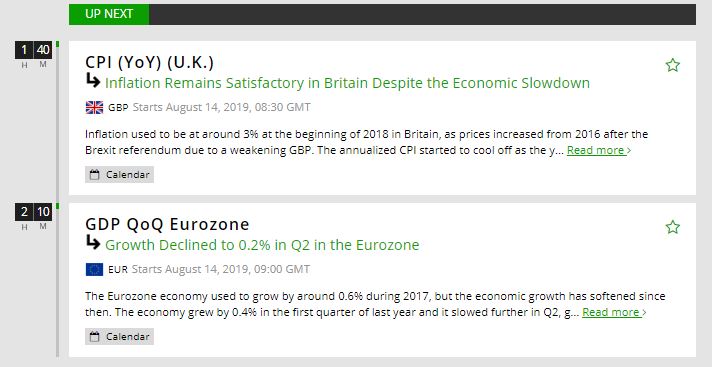 Check out FX Leaders economic calendar for the live coverage of these major events. Good luck!