EUR/USD Completes A Round Trip After the Support Holds, Following the ECB - Forex News by FX Leaders 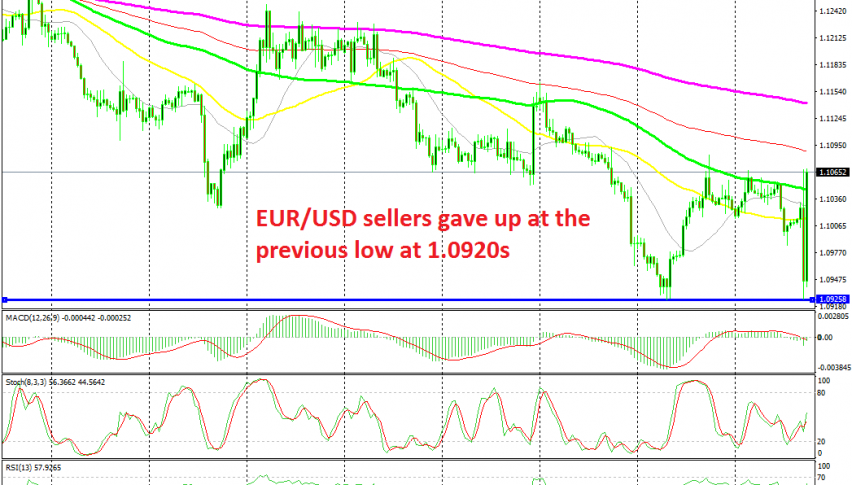 EUR/USD Completes A Round Trip After the Support Holds, Following the ECB

EUR/USD has ended up higher now after the reversal

The European Central Bank (ECB) finally decided to cut interest rates after a number of major central banks have down so in the last several months. The ECB cut deposit rates by 10 bps, from -0.40% to -0.50%. They also announced the start of the another quantitative easing (QE) programme.

That programme will be a bond purchasing scheme of 20 billion Euros a month. The Euro turned bearish following the rate cut and it slipped around 150 pips lower from the top today. But, the previous low at 1.0920s held once again to the pip, so it has now turned into an important support level.

This pair has failed to close above the 100 SMA (green) on the H4 chart for several weeks, but now it has moved above it, which is a strong bullish signal. Perhaps traders were expected a stronger move by the ECB, such as a larger QE programme or further rate cuts on the table.

So, once the sellers failed to break the support, the EUR/USD traders reversed their positions. This is the only explanation of this strong bullish reversal in the last couple of hours. Rumours of higher odds for a Brexit deal are also helping, as the GBP also climbs higher against the USD.