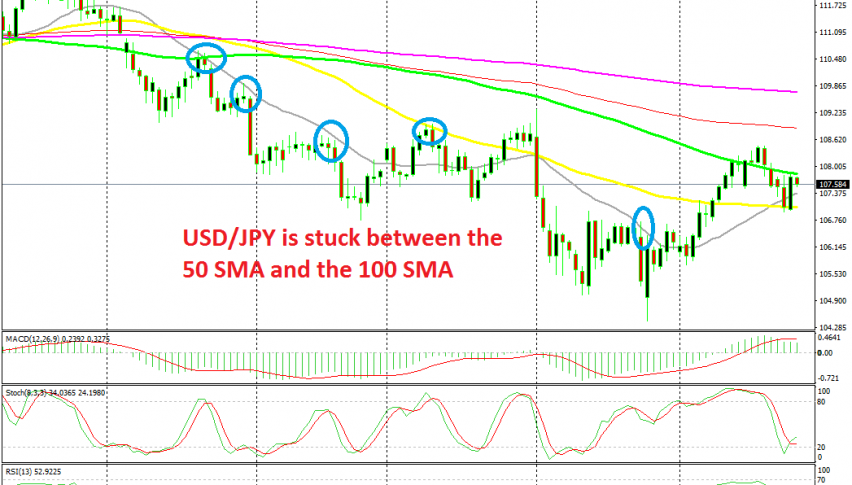 USD/JPY Bounces Between Moving Averages on the Daily Chart

The price continues trading inside the range

During the downtrend of the last several months, moving averages turned into resistance on retraces higher. The smaller MA such as the 20 SMA (grey) provided resistance when the trend picked up pace. When the trend slowed and the pullbacks were more decent, the 50 SMA (yellow) came into rescue and reversed the price down.

This month though, the sentiment has improved considerably after softer tones and positive comments from China and the US. As a result, USD/JPY climbed more than 400 pips from the bottom, below the big round level at 105. Although, it seems that now the 100 SMA (green) has turned into resistance.

This moving average provided resistance two weeks ago, although on Monday last week the price opened with a bullish gap above the 100 SMA. But, the price returned back down and now this moving average is working as resistance once again. Earlier this week we saw USD/JPY slide lower, but the 50 SMA turned from resistance into support and reversed this pair higher again.

But, buyers couldn’t push above the 100 SMA, so this pair is now bouncing between these two moving averages. You could trade the range between them if you are up for it, or wait for the break of either of these MAs and then go with it, i.e. selling USD/JPY on a break of the 50 SMA or buying it if the 100 SMA breaks to the upside.