The market continues to trade the Risk-off sentiment in the wake of the US-China trade war, Brexit uncertainties, and the ongoing geopolitical tensions between the US and Europe regarding tariffs.

The US trade representative Robert Lighthizer said that the World Trade Organization has confirmed, after 15 years of litigation, that the United States was entitled to impose countermeasures in response to EU’s illegal aircraft subsidies. Moreover, they expect a negotiation with the European Union in terms which will be beneficial for American workers.

The Italian Foreign Minister, Luigi Di Mario, expressed his concerns over US tariffs on Italian exports and said that the government would do anything to support its exporters in the current economic slowdown.

That being said, the market is keeping gold bullish, dollar bearish, and also weighing on the stock markets. The most awaited economic events, the US Non-farm payroll and employment change are scheduled to come out later today.

Statistics Canada is due to release Canadian trade balance data along with the US labor market figures. Canada’s trade deficit increased to CAD 1.12 billion back in the month of July 2019. Whereas, the number got revised to CAD 0.06 billion in the previous month.

Imports expanded by 1.2% while exports sank 0.9%. Therefore, the Canadian trade surplus with the United States decreased to CAD 4.58 billion from CAD 5.52 billion in the prior month.

Today, economists are expecting no change in this month’s figure as trade balance is expected to report a deficit of -1.1B vs. -1.1B.

The US NFP (Nonfarm Employment Change) and the unemployment rate will remain under the spotlight. Both these economic data sets will be monitored at 12:30 GMT. NFP is expected to be slightly positive at 140K vs. 130K during the previous month.

Unemployment Rate – Whereas the unemployment rate is likely to stay unchanged at 3.7% and the average hourly earnings are expected to rise by 0.2% vs. 0.2% previously. The weaker data will offer an opportunity to short the Greenback for a quick 60-100 pips and vice versa. 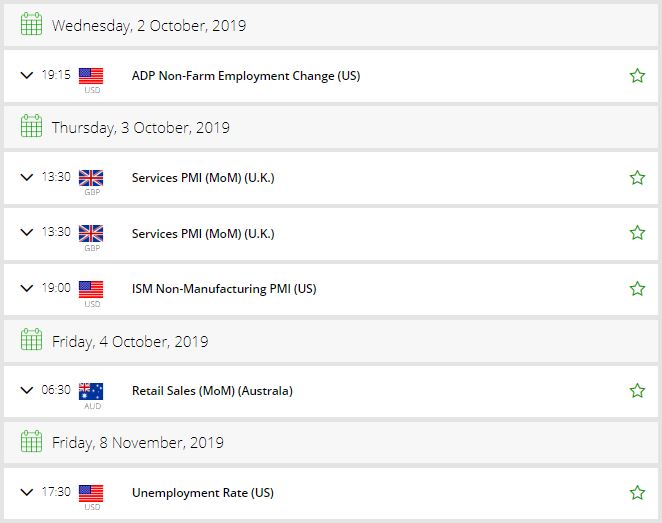 That’s all for now, but stay tuned to our economic calendar for live market updates and forex trading signals.

Forex Signals Brief for May 13: Elon Hits Bitcoin
23 hours ago