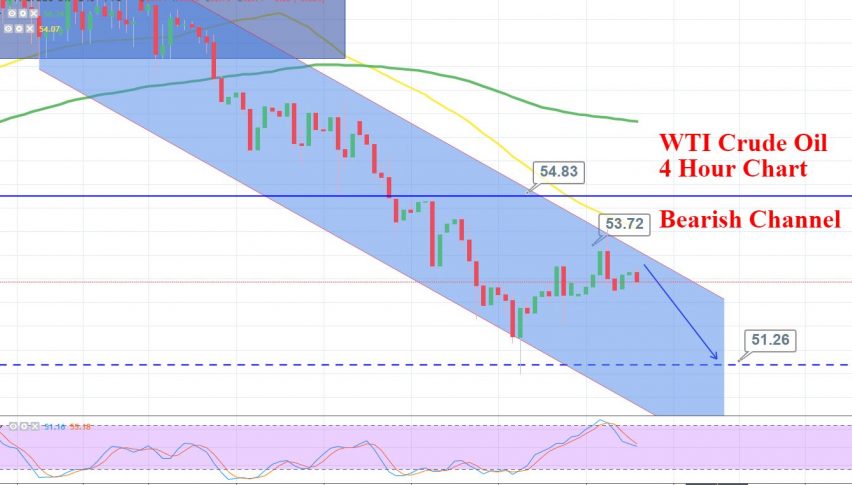 During the Asian session, WTI crude oil prices flashed green and red, as investors were confused ahead of the high-level trade talks between the United States and China trade talks, which is scheduled to happen this Thursday. Vice Premier Liu He, China’s chief trade negotiator, is ready to meet with his counterparts on Thursday. Moreover, there are confusing signs about the outcome of the meeting. Most of the market isn’t expecting much from trade talks.
As per the series of mixed reports, the senior Chinese officials restricted the range of topics they are ready to cover during trade talks this week. It’s mostly because the Donald Trump administration placed 28 Chinese technology companies on a US trade blacklist. The positive outcome of the trade war may drive crude oil prices bullish and vice versa.

On the technical front, crude oil is facing stiff resistance extended by the bearish channel at 53 levels. The RSI and Stochastics are leading lower after testing the overbought zone.
We need to closely watch the RSI and Stochastics as the bearish breakout can help us secure a quick sell position in US Oil today.
The support level continues to remain at $52, where the bearish breakout of this level could drag oil prices lower to $51.20 level.
Daily Support and Resistance
S3 50.29
S2 51.72
S1 52.29
Pivot Point 53.15
R1 53.72
R2 54.57
R3 56