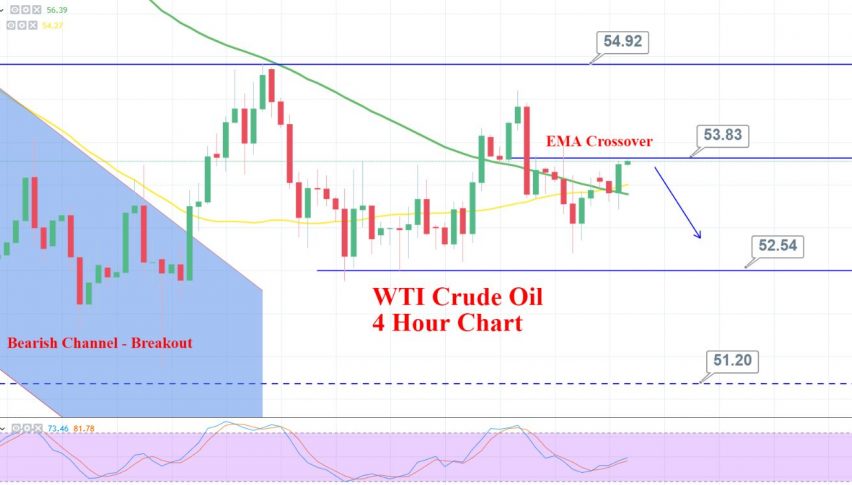 It’s been a few days now that WTI crude oil prices are trading in an extensive trading range of 54 – 53. Overall, crude oil prices sank nearly 1% on Monday following remarks from a US official regarding concerns about the US-China trade war. It added further worries that a slowing global economy would diminish demand for oil.

China’s GDP growth slowed to 6% year on year in the 3rd-quarter of 2019, against a forecast of 6.1%. Moreover, Russia announced that it produced more than expected oil during the month of September due to an increase in gas condensate output as the country prepared for winter.

The Organization of the Petroleum Exporting Countries (OPEC), Russia and other oil producers, an alliance known as OPEC+, had agreed back in December 2018 to decrease supply by 1.2 million barrels per day (bpd) from the start of this year.

Technically, crude oil is suggesting a neutral bias, but the breakout setup may help us capture quick trades in WTI crude oil. At the moment, crude oil is facing immediate resistance at 53.85 area, the violation of which could extend bullish rally until 54.50 and 54.92.

On the flip side, crude oil may trade bearish until 52.55 level if it manages to trade below 54. By the way, bullish engulfing and bullish crossover of 50 and 100 periods EMA are suggesting a strong bullish bias among traders.