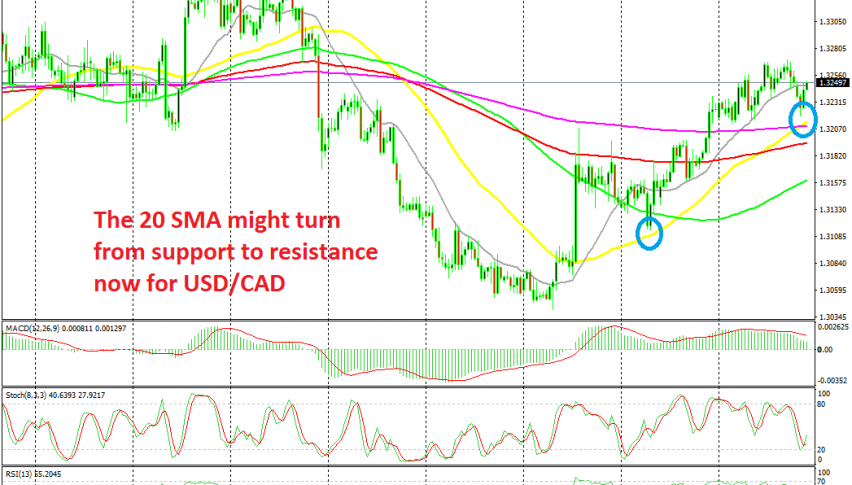 The pullback ended during the night for this pair

USD/CAD turned bullish in the last week of October, after being bearish for most of last month. Crude oil turned bullish in October,which helped the CAD, hence the bearish momentum last month. This month, buyers have been in charge in crude Oil again, but the soft employment report from Canada and some disappointing economic reports have turned the CAD bearish this month and USD/CAD bullish.

During this month, the 20 SMA (grey) has been providing support during the declines on the H4 chart and pushing the trend higher. On this time-frame and on the daily chart, this pair has moved above all moving averages, which shows that buyers are in control now.

Yesterday, USD/CAD retraced down to the 20 SMA (grey) on the H4 chart and we decided to take that opportunity and go long. But, the decline continued after Jerome Powell’s comments that nothing is booming in the US economy. As a result, the 20 SMA was broken, but the price reversed above the 50 SMA (yellow), which provided support last week.

Now the price has moved just above the 20 MA, but it still remains pretty close to it, so the break above the 20 SMA again is not official yet. If buyers manage to push above it, then the uptrend will resume, but if they fail, then this pair will be headed for the 50 SMA again.

Wall Street Closed In Observance Of Independence Day
23 hours ago