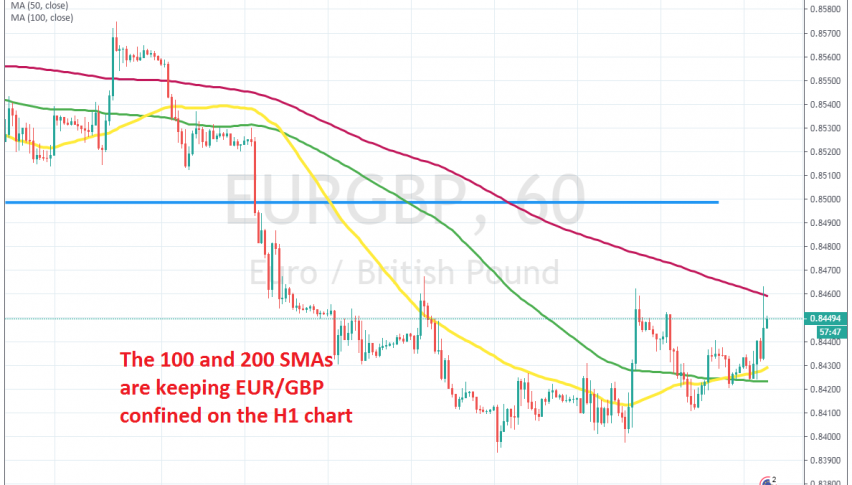 EUR/GBP Remains Stuck Between MAs, as UK Elections are Underway

Until election results come out, EUR/GBP will remain stuck in between

EUR/GBP has been bearish for quite some time, as the Euro keeps declining due to the recession in the manufacturing and industrial production, while the GBP on the other hand has been bullish in recent months, on hopes that Conservatives will win the elections and push ahead with Boris Johnson’s Brexit deal afterwards.

The level at 0.85 turned into support for some time, but it was broken earlier this month. The 50 SMA (yellow) turned into resistance for some time, pushing this pair down after pullbacks higher. But, we saw a bullish reversal on Tuesday evening and the price finally broke above the 50 SMA and the 100 SMA (green).

Today, the general elections are being held in the UK and according to polls which were conducted until Tuesday evening, Tories are expected to win comfortably. Nonetheless, we saw another jump in EUR/GBP earlier today, after this pair found some support at the 100 SMA.

But, the 200 SMA (purple) held as resistance, so now EUR/GBP is stuck between these moving averages. There will surely be a breakout, but only after we get the first results, because exit polls are not allowed in the UK. If things go as they are going, the Tories will win the elections and EUR/GBP will likely resume the bearish trend after that.

USD/CAD Bounces Off the 50 SMA, Despite the Upbeat Canadian Wholesale Figures
20 hours ago
Comments