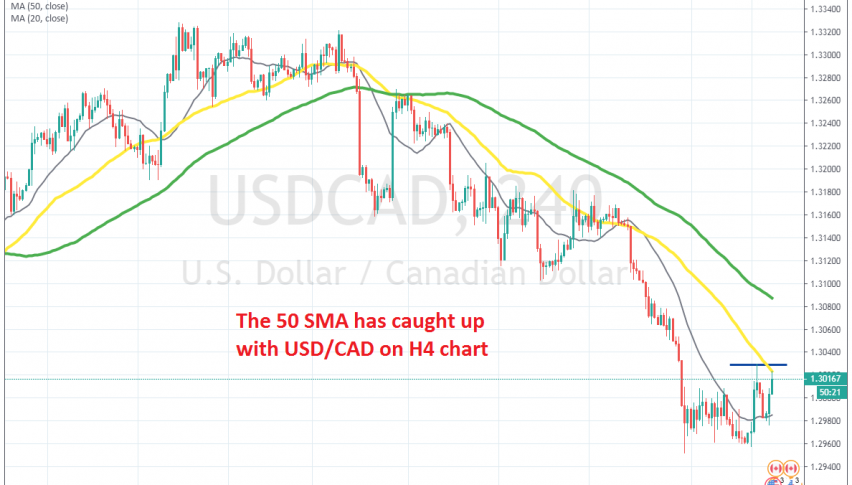 Selling USD/CAD Again at the 50 SMA

Yesterday we decided to go short on USD/CAD after the pullback higher from 1.2960s to 1.3020s. This pair has been pretty bearish during December, after OPEC+ placed new production quotas, which reduced the output by an additional 50k barrels/day.

As a result, the CAD has been bullish since then, while the USD has been bearish, for reasons we have often mentioned recently. But, yesterday we saw a decent pullback higher, as the sentiment improved and crude Oil retraced higher. We sold the retrace below the 50 SMA on the H4 chart and booked profit overnight, after tensions escalated further in Iran and Crude Oil surged higher, reversing this pair down again.

The sentiment has improved during the European session since things are not escalating further, at least for the time being and Crude Oil has turned bearish. USD/CAD has climbed higher again, but it is finding it difficult to break above yesterday’s high at 1.3020s. The 50 SMA (yellow) has caught up with the price as well, which is adding strength to the resistance area. So, we decided to take another shot, shorting this pair below the 50 SMA again. Now let’s see if the bearish trend will resume again.

USD/CAD Failing at MAs, Despite Dovish Remarks by BOC's Macklem
19 hours ago