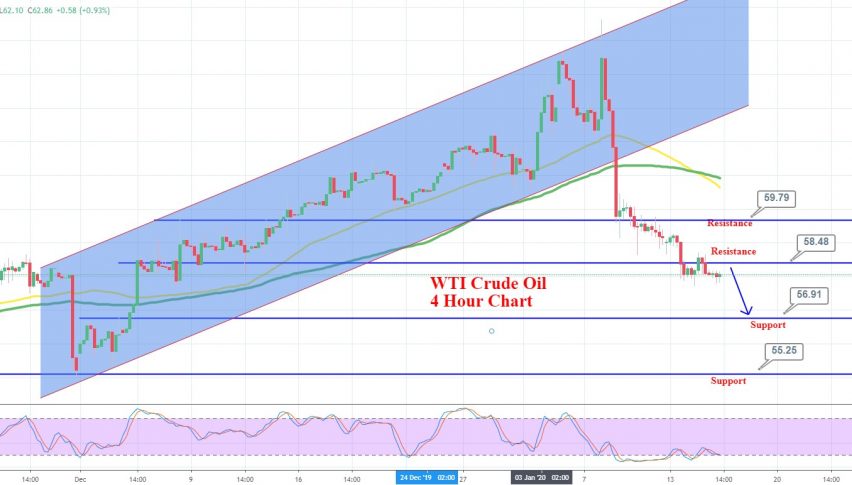 WTI crude oil prices came under pressure and dropped mainly due to the American Petroleum Institute (API) reported that US crude stockpiles rose by 1.1 million barrels last week and due to the uncertainty surrounding the Sino-US trade deal after negative comments came from the United States administration.

US Crude Oil WTI Futures fell 0.3%$ to $58.08 by 11:15 PM ET (03:15 GMT). While the API said that crude inventories were up by 1.1 million barrels for the week ended January 10. Ahead of the Energy Information Administration report, which is scheduled to release later in the day, analysts are expecting a crude inventory decline of 750,000 barrels.

US oil production is expected to rise to a record of 13.30 million barrels per day in 2020, mainly driven by higher output in the Permian region of Texas and New Mexico, the US Energy Information Administration (EIA) said.

At the Sino-US trade front, the United States decided that it will not remove tariffs on Chinese imports until the 2020 presidential elections are complete, which resulted in increased uncertainty surrounding the signing ceremony of phase one of the trade deal between the US and China. The meeting to sign the deal will happen today, while no details have been revealed yet.

As we are all well aware, Crude Oil markets traded higher earlier this month mainly due to a US drone strike which killed top Iranian general Qassem Soleimani in Baghdad on January 3, and sparked fears of an all-out US-Iran war.

On Wednesday, WTI continues to trade bearish at 57.75, followed by three black crows pattern. This pattern typically drives strong bearish moves in the market. On the lower side, crude oil support is likely to be found around 56.88. The RSI and Stochastics are holding in the selling zone, suggesting odds of continued selling trend in the crude oil. The idea today is to stay bearish below 58.20 with a target of 57.35. Good luck!

Selling Crude Oil Again, As the Pressure Remain to the Downside
23 hours ago