Will the BOE cut rates next Thursday?

Last year many major central banks cut interest rates several times. The Reserve bank of Australia and the Reserve Bank of Canada cut rates three times, as did the FED, after Donald Trump kept pushing them to do so. The ECB cut deposit rates to -0.50% from -0.40% and started another QE programme in November.

Central banks of emerging economies cut rates even more last year and the summer months were when the most aggressive cuts took place. Central banks of developed countries have stalled cutting rates now, but the Bank of England (BOE) is thinking about doing the same now, after being neutral throughout last year.

The UK economy was holding up well in 2018 when the global economy started to weaken, due to the escalating trade war between US and China, as well as the quick monetary tightening of the previous years, especially from the FED. But, the weakness caught up with the British economy by the middle of last year, although the BOE remained neutral, waiting to see what direction Brexit would take, particularly after the general elections were announced in October. There was a slight chance that the Labour party might win the elections, which would put Brexit in question and improve the sentiment. But, Tories won a clear majority and now the direction is clear, the political scene has become clearer in Britain and Brexit will happen at the end of the year.

Now, the BOE has turned dovish and odds of them cutting interest rates have increased considerably. Odds stood at around 5% several weeks ago for a cut in the next meeting on Thursday, but after the elections they jumped to around 60%. Several sectors have been in recession for some time, such as manufacturing, industrial production, construction and for a period, services also feel in contraction. Earnings also cooled off in recent months, from 4% in September to around 3.2% in November. 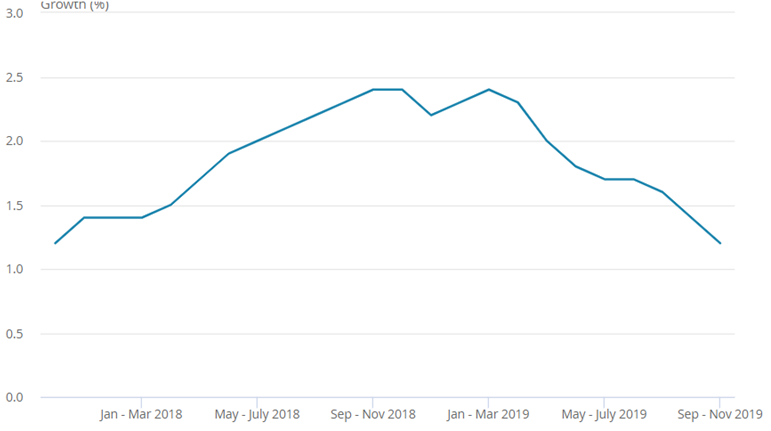 Services are on a descending trend, despite the jump in December

Although, we have seen some green shots in recent weeks. Earnings didn’t slow further in December, manufacturing activity improved, although it still remain in recession and services left contraction behind and made a decent jump last month, as the report released on Friday showed.

The odds of a rate cut by next Thursday declined to around 50%, so it’s 50/50 that the BOE will cut rates next week. BOE governor Mark Carney has sounded dovish recently, as inflation has cooled off too, as have other BOE members. The GBP has ben bearish since after the elections by the middle of December and despite the positive numbers on Friday, GBP/USD turned bearish again.

Odds for a rate cut next week stand at 57%

That shows that markets still think that the BOE might cut rates next week. That would be the positive scenario for the GBP. If the BOE cuts rates next week, then the next rate cut will likely be a long way from now, if there might be another cut down the road.

This would help the GBP in the coming months, which would probably turn bullish against most major currencies. If the BOE holds on, then the GBP will remain bearish, since odds for a rate cut in the following meeting will increase further. We know that traders hate it when the central bank keeps a rate cut hanging like a sword above the neck, hence the bearish reversal in the GBP during the last month. So, a rate cut next week would be better for the GBP. If they don’t cut interest rates, then we will remain bearish in GBP pairs in the coming month.