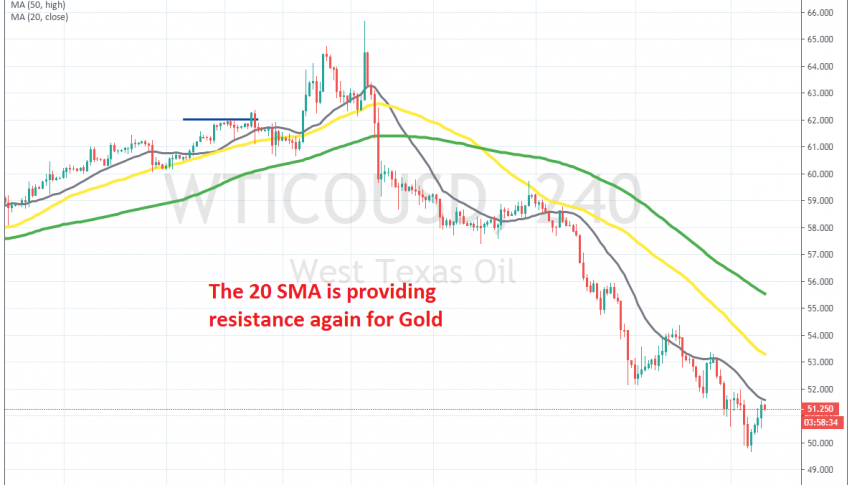 Selling the Pullback in Oil After Commnets from Novak

The pullback ended at the 20 SMA on H4 chart

Crude Oil has turned quite bearish since the second week of this year. In December last year, Oil was pretty bullish, after OPEC+ decided to cut production again by placing additional quotas for 50k barrels/day. The tensions between US and Iran in the first week or so of this year gave Oil another push higher, on fears that the conflict would disrupt Oil production in the region.

But, tensions in the Middle East cooled off which removed one of the main reasons for WTI Oil to climb higher. Then came coronavirus, which gave many reasons to Oil to turn bearish. So, the trend has been bearish since then and retraces higher have been really weak.

Today we are seeing another of those pullbacks higher, but this seems pretty weak as well. The price is just below the 20 SMA (grey) on the H4 chart. This moving average has been providing resistance a few times last week and it’s doing the same now.

So, we decided to open a sell forex signal below the 20 SMA. We heard rumours from OPEC yesterday that they might cut production by an additional 500k barrels/day, which is quite a lot. But, Russian energy minister Novak opposed this a while ago. Below are some of his comments:

So, it seems like the meeting planned for February, which is when they they will decide about another production cut might not even take place. Crude Oil is reversing back down now as a result, so our forex signal in US WTI crude Oil seems to be going well.

Selling Crude Oil Again, As the Pressure Remain to the Downside
6 days ago