The coronavirus outbreak has been messing with the sentiment in financial markets, driving them up and down since mid January. There was panic in the last two days of January, as the virus turned into a pandemic in China. But, the sentiment improved earlier this month, after the pace of spread slowed in China and the cases outside of China were low. This gave us the idea that the worst was behind us and the virus was getting under control. But, over the weekend cases of infected people and deaths outside of China jumped higher, particularly in Italy and South Korea, as well as in Iran.

Now fears that the virus might turn into a global pandemic, especially in Europe after the surge in cases in Italy have gone up again and the risk sentiment has turned sour again in financial markets. Gold has surged higher, while risk assets, especially stock markets are in a bloodbath. Bond yields also cracked lower with 10-year Treasury yields falling below 1.40% while 30-year yields continued to chase fresh record lows during the session. We saw some improvement from the data today, in Canada and the Eurozone, but today’s number’s don’t take into account the coronavirus impact, so we will have to wait for the data released next month to see how big the impact is. 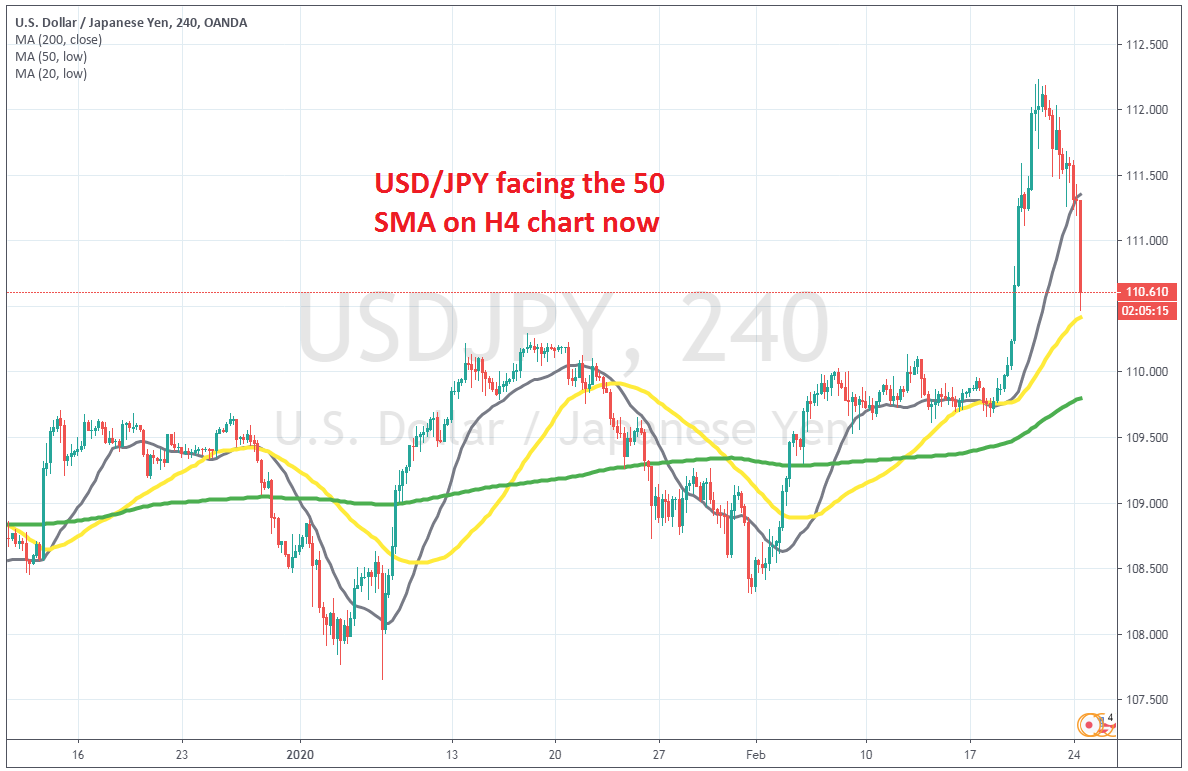 USD/JPY has been on a steady bullish trend since summer last year. The trend has been unfolding in waves and pushing higher, as the sentiment improved in financial markets, on prospects of the Phase One deal between US and China. As a result, USD/JPY pushed above the big round level at 110 earlier this week.The coronavirus outbreak in China had some negative impact on this pair towards the end of last month, as the JPY rallied as a safe haven. But, USD/JPY returned higher again and ended the week around 110 two weeks ago. Then, the sentiment improved further last week as the virus was being contained within China, with only a few cases abroad and this pair surged to 112.20s.

But, the coronavirus has spread outside of China now and fears spiked that it might turn into a pandemic outside of East Asia, after the jump in new cases and deaths in Italy over the weekend. Stock markets turned bearish today and USD/JPY declined as well. This pair lost around 170 pips today, but it is facing the 50 SMA now at 110.40s. Below that, you can find the previous resistance at 110.20s, which will likely turn into support now. The 110 zone also offers some support, so if there are no more explosions of new cases outside of China, I think that we will see a bullish reversal from these levels. But, we have to follow coronavirus now.

The pace of the spread of Coronavirus was slowing last week, which calmed traders down. But, the jump in new cases over the weekend, especially in Italy, increased fears that the virus might turn into a pandemic in Europe as well, so the sentiment has been quite negative today and markets will likely follow the news in the following session about how coronavirus is progressing.