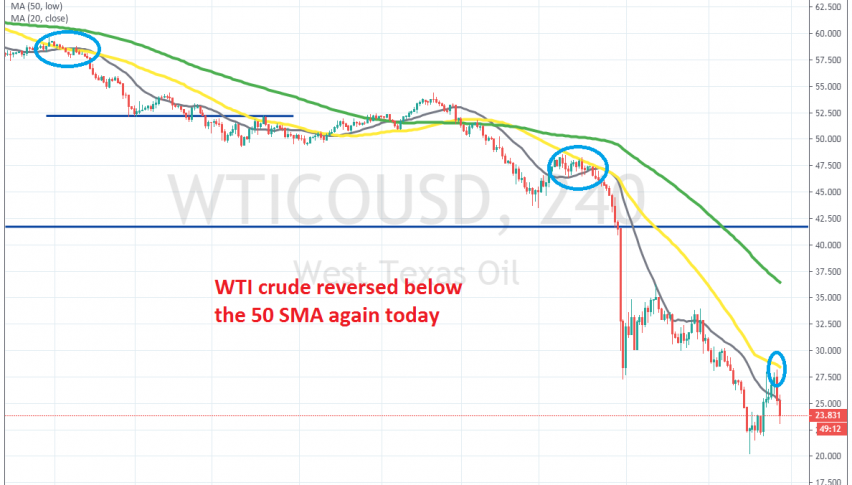 The Retrace in Crude Oil Ends at the 50 SMA

Crude Oil is heading down again

Crude Oil crashed down after Saudi Arabia started to flood the market with crude Oil, following Russia’s objection to join OPEC in a 1.5 million barrels/day cut in production. Crude Oil was already in a decline, with WTI crude down around $35 in about a month.

But after the fallout between Russia and Saudi Arabia came the biggest crash. US WTI Oil lost around $10 during that weekend and has continued lower, reaching $20 yesterday. But, in the last several session we saw a pullback higher and crude Oil retraced to $28.

Although, that was also due to some USD weakness during the last two days. After all, after such a steep decline, there was time for a decent pullback higher, before another attack to the downside. The retrace ended indeed and ended right below the 50 SMA (yellow) on the H4 chart.

At some point, the decline today was nearly $5, after crude Oil reversed down, but has pulled back a little higher now. Nonetheless, the trend remains pretty bearish and Oil seems to be heading back down. So, we will try to sell pullbacks higher as long as the pressure stays to the downside.