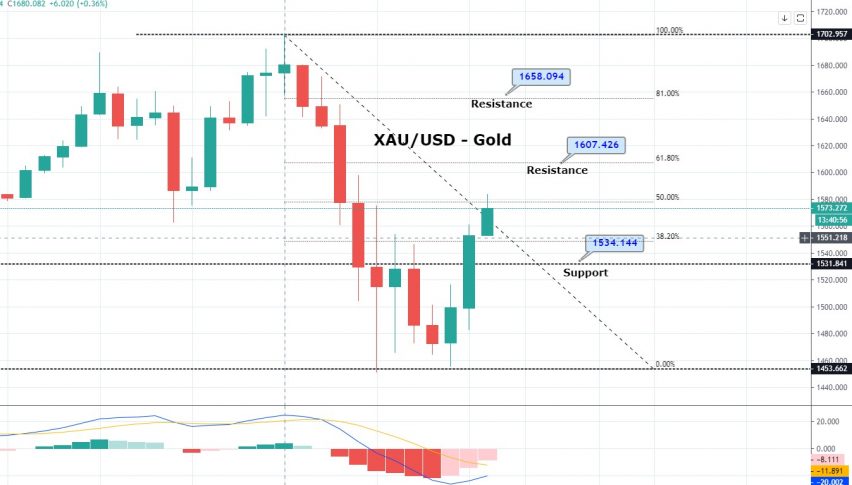 Gold Brief, Mar 24: Things you Need to Know About the Precious Metal Today

On Tuesday, the safe haven metal prices were flashing green and rose 1.7% to 1,596.30, mainly after the United States Senate failed to announce the long-awaited stimulus package on Monday. However, GOLD continues to extending its 3-day bullish streak and is struggling to cross the 1,600 level.

At the time of writing, gold is currently trading at 1,595.45 and consolidates in the range between 1,560.40 and 1,603.15. However, the reason behind the bullish trend could also be the broad-based USD weakness. Gold is trading bullish by 1.7% to $1,594.20 as the Fed announced unprecedented measures to buy unlimited amounts of Treasury bonds and mortgage-backed securities.

The US Senators continue to mark their disapproval with the Trump administration’s huge aid package, estimated at around $2 trillion, in order to control coronavirus (COVID-19). Apart from this, the market’s risk-tone was also threatened due to the continued increase in virus cases in the US and across the world. As a result, many major nations announced lockdowns in their countries and also announced fine on the public to push them to stay at homes.

On the other hand, US President Donald Trump tried to satisfy traders with signals to possible drug recovery, but he did not succeed in hiding fears of further delays in the relief package. The United States Senate failed to pass the much-awaited $2 trillion COVID-19 Bill but the Republicans are still expecting the deal to be started soon. On Monday, the US Federal Reserve (Fed) announced unlimited Quantitative Easing (QE) to control the disease. However, the risk-sentiment continues to remain stable with the US 10-year treasury yields, S&P 500 Futures and Asian stocks all on their ways to recover the latest losses.

It should also be noted that the uptick in the expectation of inflation is keeping gold higher and driving the greenback lower. The dollar index, which traces the price of the dollar versus other majors, is currently trading at 101.80, representing a 0.67% decline on the day. Apart from the virus and aid packages headlines, the preliminary readings of the PMIs from the key global economies will be key to watch for taking fresh directions. 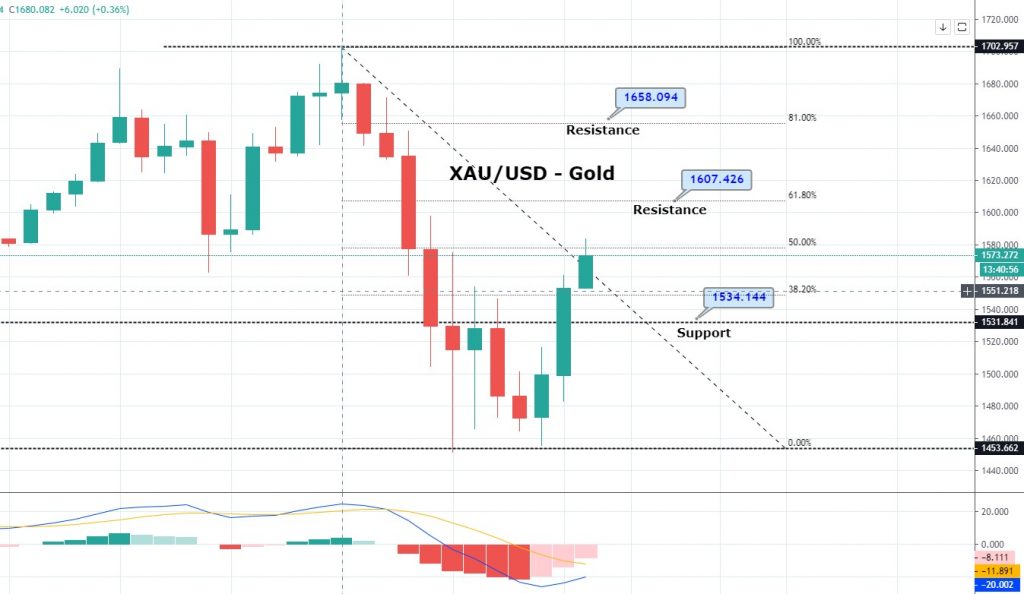 The precious metal gold reversed to trade at 1,570 level in the wake of profit-taking in the US dollar. On Tuesday, the XAU/USD pair is likely to face resistance at 1,576, which marks the 50% Fibonacci retracement level.

Bullish crossover of this level can extend buying until a psychological resistance level of 1,600, which also marks 61.8% Fibonacci retracement. On the lower side, gold may gain solid support at 1,547 level, and violation of this could open further selling until 1,531. Let’s keep an eye on 1,576 as closing above this can make gold bearish and vice versa. Good luck!