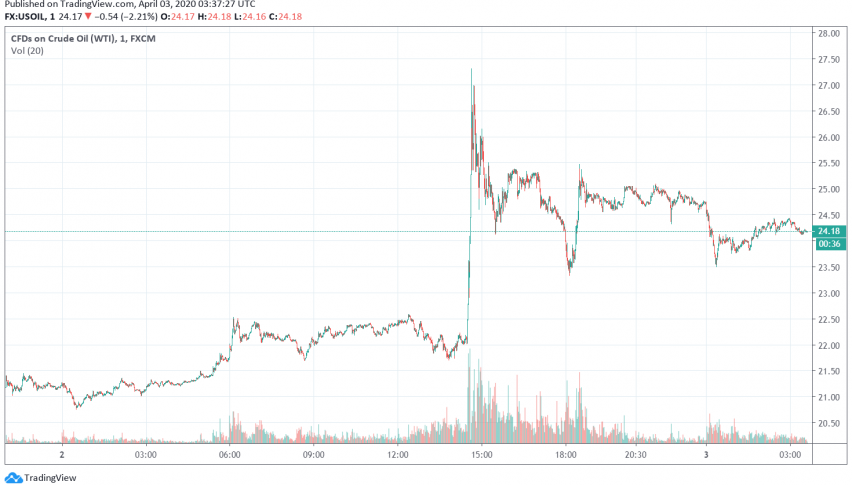 After the highest single day gain in the previous session, WTI crude oil prices have slid lower early on Friday over uncertainty about possible resolution of differences between Saudi Arabia and Russia. At the time of writing, WTI crude oil is trading at around $24.18 per barrel.

On Thursday, WTI crude oil gained over 24% over rising hopes for an end to the price war after US President Donald Trump hinted that he had managed to broker a deal between the two countries. Trump had stated that he was hopeful that Saudi Arabia and Russia would agree to cut oil output by 10-15 million bpd to offset the fall in demand globally in the wake of the ongoing coronavirus pandemic.

However, doubts resurfaced soon after as no further details were forthcoming, even as the US made no commitments to curb oil production to balance the weakening demand in oil markets. Meanwhile, analysts also remain skeptical about whether the production cut by Saudi Arabia and Russia, if confirmed, would be adequate to stabilize oil markets.

For now, estimates suggest that the global oil markets are already experiencing an oversupply by as much as 25 million bpd as a result of the extended lockdowns and travel restrictions in place across multiple countries worldwide. However, in case Saudi Arabia and Russia agree to curb production, crude oil prices could rise to $30s from the present multi-year lows.