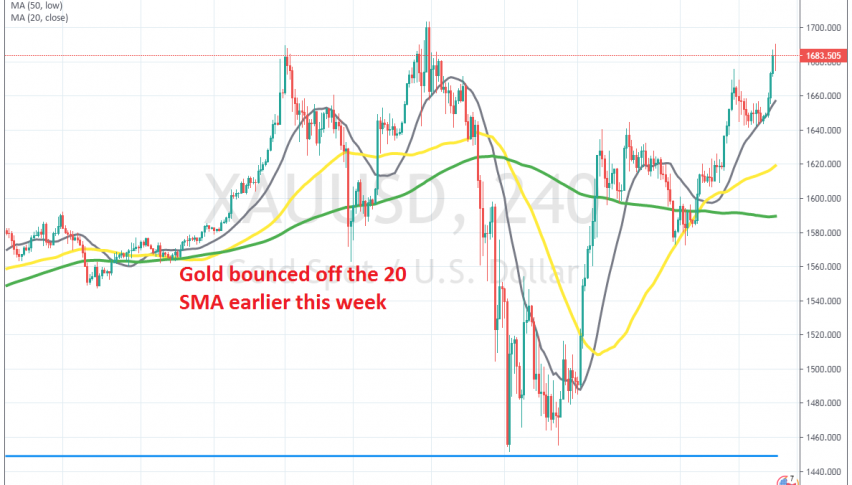 Buyers remain in control in Gold

GOLD surged higher in the first couple of months until March 9, after a slight retrace lower in Q3 of last year. In the first week of March we saw a surge and Gold climbed above $1,700 for a moment, but it reversed lower as traders turned into the USD for safety, as a world reserve currency.

Gold turned massively bearish during those panicky times and lost around $250, falling to $1.450. That might have seemed strange to some, since safe havens tend to rally during crises like this, but as we mentioned, the impact on the panic on the USD was bigger than the demands for safe havens. Although, the panic wore off, and traders realized that coronavirus wouldn’t bring the world to an end, not from deaths anyway, which turned the attention away from the USD.

Although, speaking from an economic perspective, the virus might actually bring the end, because if the virus stays for a few months and the shut down continues, then this might turn out to be a worse crisis than the one we saw in 2008-09.  The wprld was brought to its knees back then, first economically, then socially. If this is worse, then the end is near.

All central banks and governments have thrown whatever they have, to save the economy. So, there’s nothing left to buy apart from Gold, which has climbed again in the last two weeks. Moving averages have turned into support for Gold, with all of them dong so at some point and the smallest one, the 20 SMA (grey), so buyers are in total control.

Now it seems like Gold is heading for last month’s highs, so let’s see if buyers will push above $1,700 again and hold there this time. All signs tell us that it will; coronavirus is not going to go that fast, the economy will take a lot of time to jump-start, when the pandemic starts to fade away and a lot of cash is being thrown at the global economy, which also points up for Gold.