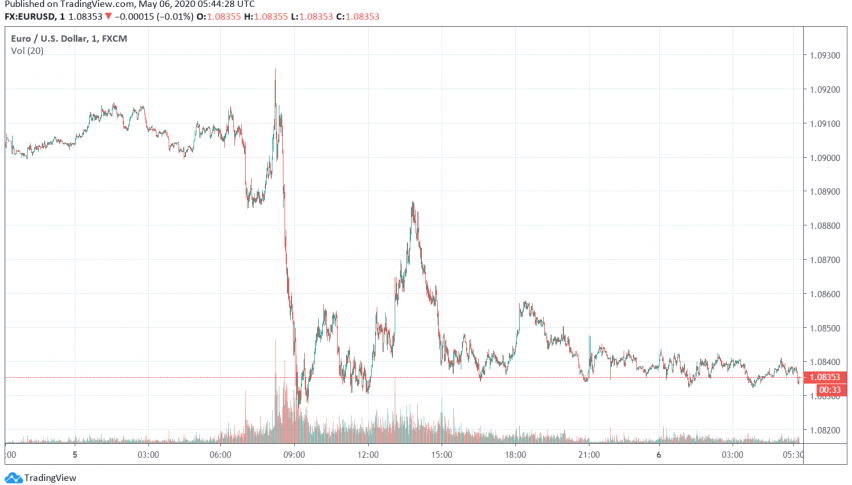 The euro is trading weaker against the US dollar on Wednesday over rising worries about the progress of economic recovery in the Eurozone after a court challenged Germany’s contribution to centralised European stimulus programs. At the time of writing, EUR/USD is trading around 1.083.

During the previous session, the highest court in Germany asked the ECB to justify its recent decision to increase bond purchases as part of stimulus measures to fight the economic impact of the coronavirus pandemic. The court has given the central bank a deadline of three months to justify its move, and a failure to provide a reasonable explanation could see Germany’s central bank, Bundesbank, pull out from this initiative.

This latest development has put additional strain on the euro which has been weakening over the past several weeks owing to the risk-off sentiment in markets over fears of a global economic recession as a result of the pandemic. However, even with the recent improvement in risk sentiment as some economies look to reopen, EUR/USD has been unable to climb higher unlike other riskier currencies over rising uncertainty about Eurozone economic outlook.

Even as the pandemic rages on across Europe, policymakers have been unable to come to an agreement about necessary stimulus measures that could revive the economy once the crisis wanes. Euro area nations are divided about the role of ECB and central measures as worse affected countries like Italy and Spain call for more such measures, a move being opposed by members like Germany and the Netherlands that have not suffered as severely and have better economic health.

EUR/USD Makes a Break Above MAs, After US Q2 GDP Misses Expectations
3 days ago