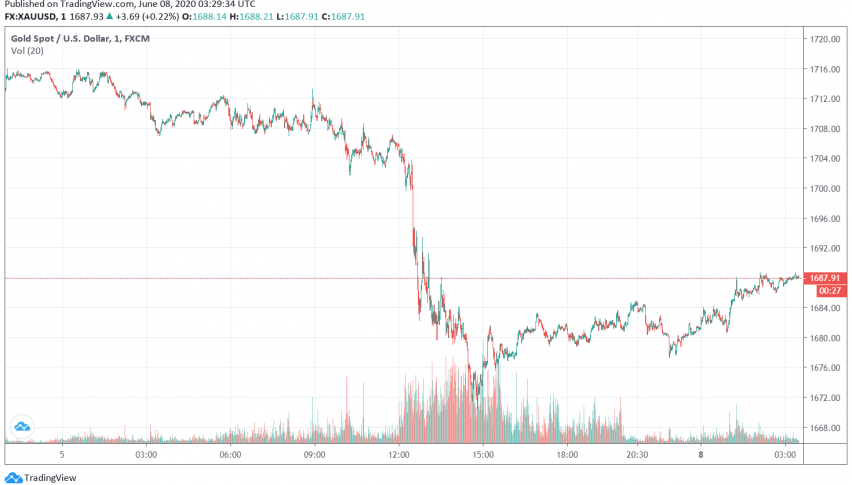 Early on Monday, gold prices are trading bearish as the market sentiment remains high on the back of a better than expected US NFP report which released last Friday, revealing an uptick in the employment numbers in the country. At the time of writing, GOLD is trading at a little above $1,687.

Over the previous week, gold lost around 2.4% of its value as its safe haven appeal got diminished over rising optimism about economic recovery as several countries worldwide emerged out of lockdown. The mood in the markets has been lifted by expectations that resumption of economic activity can drive recovery after the coronavirus pandemic and help the global economy work its way out of recession.

Gold prices, however, enjoy support from recent economic data releases which continue to show signs of weakness in economies around the world. Over the weekend, China’s trade data was released, which revealed a decline in exports and imports during the month of May, resulting in a record high trade surplus in the trade-reliant economy.

Gold is also expected to remain in favor as long as protests continue across US cities against police atrocities which led to the death of George Floyd at the hands of the police. Even as the US economy looks to reopen, these protests are slowing down economic recovery in several parts the country and supporting the yellow metal for now.

The Decline Picks up Pace in Gold, as the 20 SMA Turns into Resistance
11 hours ago

Daily Brief, November 24 - Everything You Need to Know About Gold!
19 hours ago