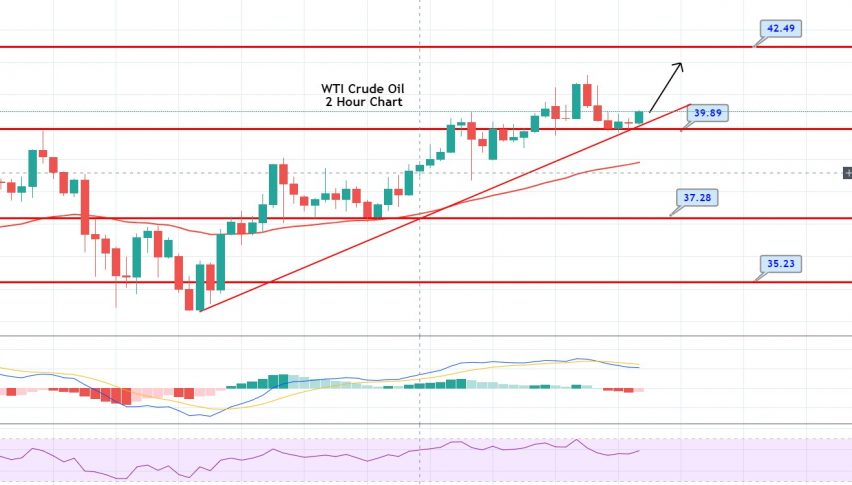 During Wednesday’s Asian trading session, WTI crude oil prices failed to stop their previous day’s losing streak and dropped below $40.00 level on the day mainly due to the bearish US inventory report released by the American Petroleum Institute (API), which eventually added worries about oversupply and contributed to the oil declines. On the other hand, several positive factors kept the risk tone moderately positive and turned out to be one of the key factors that kept a lid on any additional losses in crude oil. At press time, WTI crude oil is currently trading at 40.36 and consolidating in the range between 39.88 and 40.42.

As a result, the investor sentiment continued to be cautious over increasing fears of an oversupply. The OPEC+ production cuts will end in July, and ever-increasing cases of the COVID-19 virus also exerted some downside pressure on the investor confidence.

However, Japan’s further easing of lockdown restrictions and trade-positive signals from US Treasury Steve Mnuchin initially boosted the risk-on market sentiment and provided some support to crude oil. It should be noted that the US Treasury Secretary Steven Mnuchin will likely announce a second extension to the tax filing date in the wake of the coronavirus (COVID-19) situation.

On the other hand, the uptick in the risk sentiment could also be associated with the reports that North Korea decided to cancel military action against South Korea. The North Korean Central Military Commission, led by Chairman Kim Jong-Un, decided against an earlier plan to use more troops at the border, which added strength to the risk tone and contributed to oil prices’ gains.

At the USD front, the broad-based US dollar failed to extend its overnight gains and dropped at least for now, mainly due to better trading sentiment in the market backed by positive data from Europe and the US. However, the losses in the US dollar turned out to be one of the key factors that kept oil prices out of danger as the price of oil is inversely related to the price of the US dollar. Whereas, the US Dollar Index that tracks the greenback against a basket of other currencies slipped 0.02% to 96.590 by 11:42 PM ET (4:42 AM GMT). Moving on, the losses in the US dollar could be short-lived as the coronavirus fears and return of trade fears keeps investors cautious.

Apart from this, the tension between the United States and China remained on the cards as Beijing recently blamed America for harming the long-running phase-one deal while citing White House Adviser Peter Navarro’s confusing statement. Whereas, the state-backed media also indicated that Huawei had been a sufferer of the US’s negative policies, which could intensify the fears of Sino-American trade tussle, and this became a key factor that capped any new optimism in the market.

Moving on, the gains in crude oil could find pace if the global equity markets offer gains, keeping the safe-haven US dollar under pressure. At press time, the futures tied to the S&P 500 are reporting 0.10% gains. 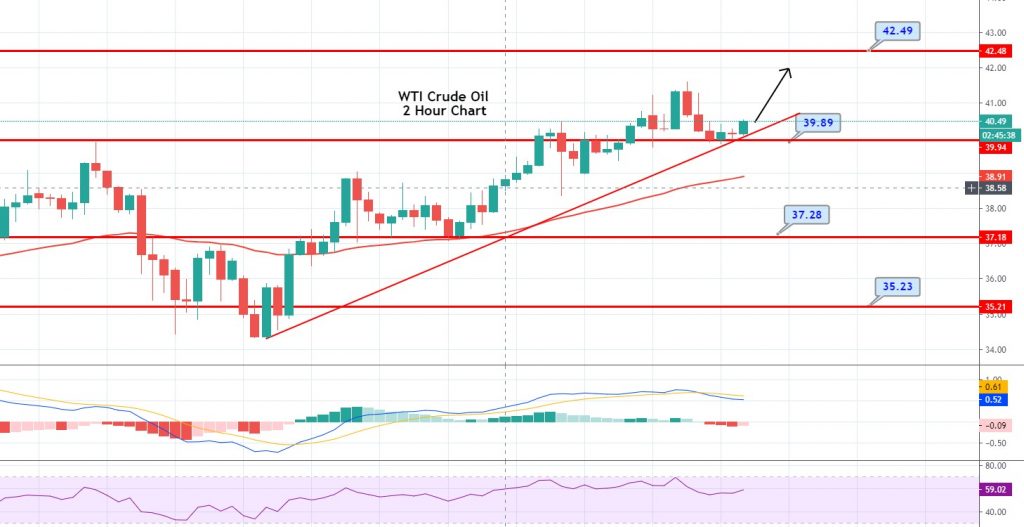 Crude oil seems to violate the ascending triangle pattern, which was providing resistance at 40.45 level. Continuation of a bullish bias can extend buying until 42.45 level while the upward trendline supports WTI crude oil prices around 40. On the 4 hour timeframe, the 50 periods EMA is also supporting it around 38.85 level. Let us consider taking buy trades today over 40.35 level to target 42.
Good luck!

Arslan Butt // Index & Commodity Analyst
Arslan Butt is our Lead Commodities and Indices Analyst. Arslan is a professional market analyst and day trader. He holds an MBA in Behavioral Finance and is working towards his Ph.D. Before joining FX Leaders Arslan served as a senior analyst in a major brokerage firm. Arslan is also an experienced instructor and public speaker.
Related Articles
WTI Crude Oil Extends its Bullish Overnight Run-Up - A Fundamental Outlook!
The [[WTI]] crude oil prices managed to extend its bullish overnight rally and hit the intra-day high level around above mid-$42.00, mainly
14 hours ago 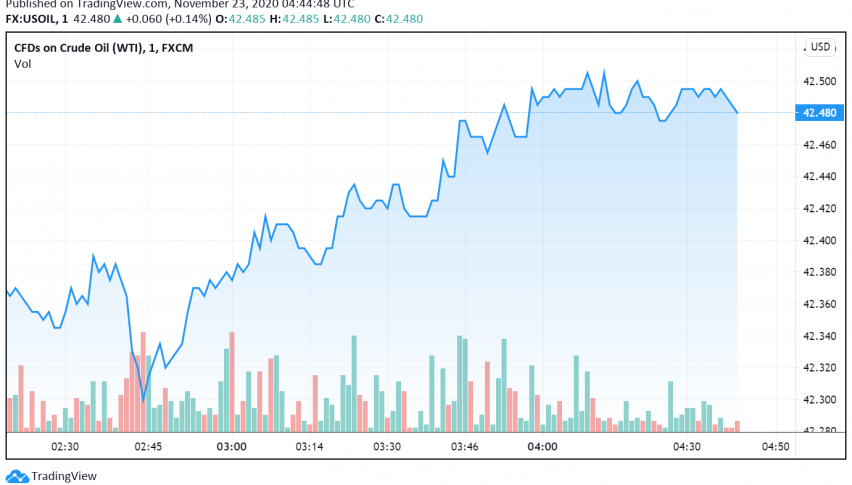 Hopes For Quick Rollout of Vaccine Support WTI Crude Oil Gains
17 hours ago
WTI Depressed Below the $ 42.00 Mark, Amid a Combination of Factors - A Fundamental Outlook!
The [[WTI]] crude oil prices failed to snap its previous-day bearish run-up. They remained bearish around below 42.00 level amid the growing
3 days ago
Comments