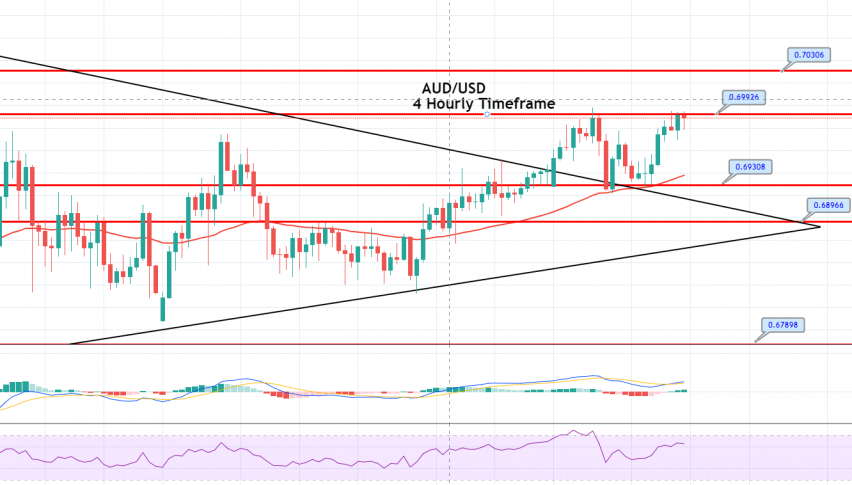 The AUD/USD pair closed at 0.69805, after placing a high of 0.69861 and a low of 0.69270. Overall, the movement of the AUD/USD pair remained bullish throughout the day. The AUD/USD pair recovered all of the previous day’s losses on Wednesday, rising towards the psychological magnet resistance level of 0.7000. It was the AUD/USD pair’s fourth attempt to pass this level this week, but it failed. The rise in the AUD/USD pair could be attributed to the weakness of the broad-based US dollar, as the worries concerning the resurgence of the coronavirus were enhanced due to the rising number of infections in the US.

The US reported a total of 3 million coronavirus cases from its many states, adding fuel to the economic and political uncertainties. The banks and governments were urged to participate more in providing help in the form of stimulus measures. This undermined the US dollar’s safe-haven status and pushed the AUD/USD pair onto the upward track.

Apart from the US, many countries also faced the same problem and were forced to re-impose lockdown measures. Australia itself re-imposed lockdown restrictions in the city of Melbourne as well as the surrounding cities. Australia’s second lockdown began on Wednesday, as five million residents of Australia’s second-largest city were forced to stay in their houses for six weeks, except for essential reasons. The borders between state of Victoria, of which Melbourne is the capital, and neighboring states, were closed on Tuesday.

The Aussie government announced a delay in easing of lockdown restrictions in ACT- Australian Capital Territory. Furthermore, on Wednesday, Australian Treasurer Josh Frydenberg suggested an extension of the government income support scheme beyond the initial limit of September. On the other hand, US top health official, Dr. Fauci, lent a little optimism to the market, stating that a vaccine would be ready by the year-end.

On the US-China front, the Trump administration continued to show its anger toward China regarding its new security laws in Hong Kong. The US diplomats considered undermining the Hong Kong dollar peg, after imposing visa restrictions for Beijing policymakers over the Tibet issue. In response, China sought for a bit of tit-for-tat by imposing visa restrictions on US policymakers. The CPI & PPI data from China will be under close observation for China-proxy Aussie traders. The unemployment claims for last week will also be the key data to watch for fresh impetus from the US on Thursday.

On the technical side, the AUD/USD pair seems bullish, as the pair is heading north to test the 0.6992 level. This resistance level is extended by the triple top pattern, which can be seen on the 4-hour chart above. Today, we should look for bullish trades over the 0.6990 level and above. The pair can go after a further high level of 0.7030. Conversely, selling bias could be seen below 0.6990 until 0.6930. Good luck!