Crude Oil Facing the 100 SMA, After Slipping Below the 50 SMA - Forex News by FX Leaders 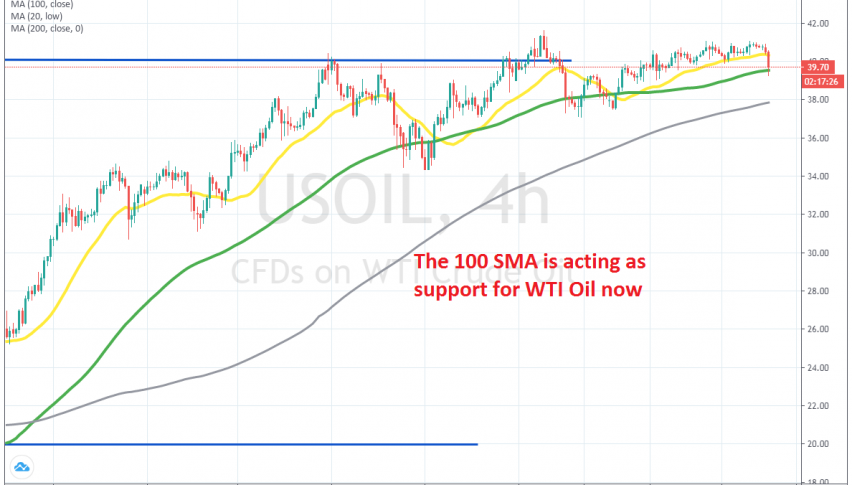 Crude Oil Facing the 100 SMA, After Slipping Below the 50 SMA

Let's see if the pullback has ended now

Crude Oil has been bullish since the big crash down ended by the middle of May. US WTI crude came back from the dead, after it had fallen to -$37, as Saudi’s tried to bankrupt the US Oil industry at a very difficult point in history, when people were in lock-down and other forces were trying to destroy food production and delivery chains.

But, the world didn’t end and the sentiment slowly turned positive again, especially as the lock-downs ended and the world started to reopen. So, the trend has been bullish since mid March and the moving averages have been pushing the price higher in US WTI crude Oil.

The price pierced the 100 SMA for a bit, but it has pulled back above it again now. This looks like a good opportunity to open a buy trade,since Oil has retraced nearly 200 pips lower. But, we will wait for a confirmation, probably a doji/pin candlestick, which would signal a bullish reversal. So, we’ll be following the price action for a while.

Selling AUD/USD at the 100 SMA, Which Has Turned Into Resistance
22 hours ago

The 20 SMA Keeping Gold Down
23 hours ago
Comments