Should We Sell the Retrace Higher in USD/JPY at MAs? - Forex News by FX Leaders 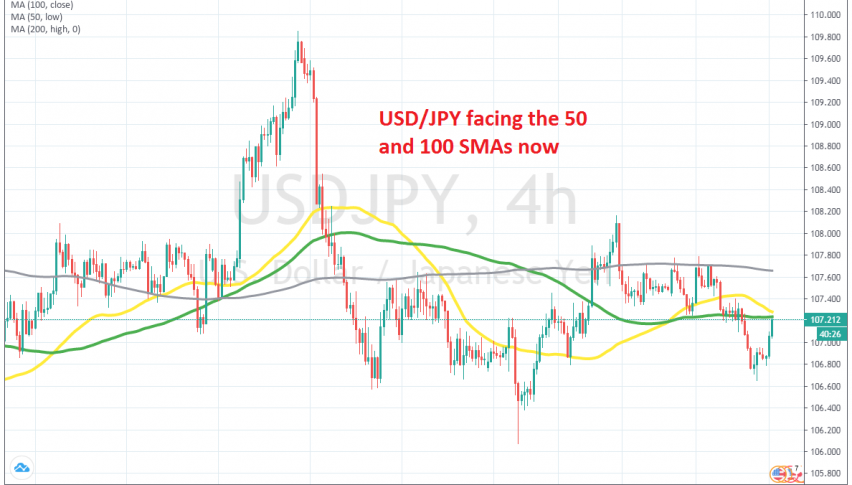 Should We Sell the Retrace Higher in USD/JPY at MAs?

The pullback seems complete on the h4 chart

USD/JPY made quite a comeback in the second half of March, after tumbling 11 cents lower earlier that month. In June we saw a 300 pip jump higher, taking this pair to 110, but that big round number held well as resistance on the H4 time-frame chart and the price reversed back down from there.

USD/JPY reversed back down from there and fell to 106 at the last week of June. But that level held as support and USD/JPY turned bullish again from there, climbing more than 200 pips higher, until the beginning of this month, which turned this pair bearish again.

The sentiment has turned cautious again among traders, as uncertainty remains high, so safe havens have attracted some bids in the last two weeks. As a result, USD ha retraced lower, back below moving averages again. Today we are seeing a pullback higher though, but now USD/JPY faces the 100 SMA (green) and the 50 SMA (yellow) above. Besides, the pullback is compete, so we decided to take a shot and open a sell forex signal, since the pressure still remains to the downside on the H4 chart.

Getting Ready to Buy NZD/USD, as the Main Trend Remains Bullish
10 hours ago
Comments