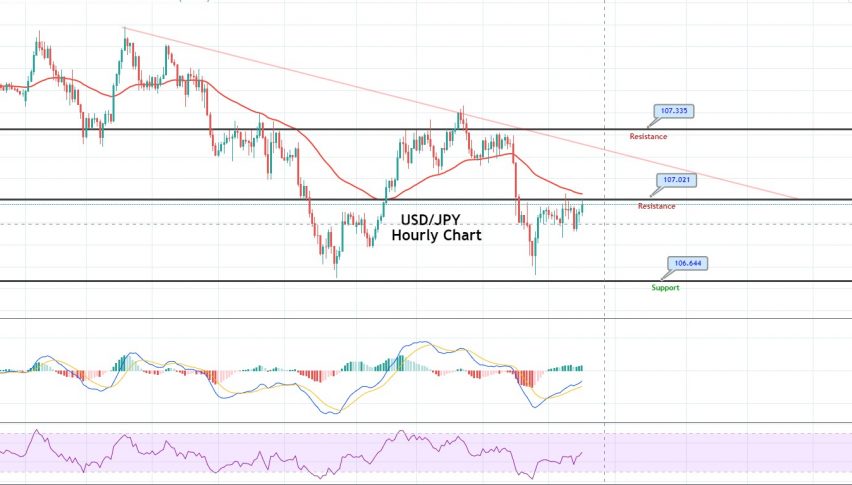 The USD/JPY pair closed at 106.940, after placing a high of 107.308 and a low of 106.664. Overall, the movement of the USD/JPY pair remained bearish throughout the day. The risk barometer, which was fueled by the news of a potential vaccine for the coronavirus, turned lower on Wednesday, causing a sudden fall in the USD/JPY prices. This can be attributed to the weakness of the broad-based US dollar.

However, the pair’s bullish move was under check by the worsening situation surrounding the spread of the virus in America and Japan. Furthermore, President Donald Trump’s latest negative comments about China also bolstered the risk-off market sentiment.

The early prognosis of a successful virus vaccine from Moderna generated hope all over the world, raising optimism around the market, and thereby boosting the risk appetite. But the risk appetite came under pressure again on Wednesday, after President Trump said in the White House Rose Garden, that he had signed the Hong Kong Autonomy Act, which was passed unanimously by Congress earlier this month. He said that the banks doing business with Chinese officials who are responsible for the implementation of the Hong Kong security laws would also be also penalized.

In response to this, China’s foreign ministry firmly opposes and strongly condemns the Hong Kong Autonomy Act. The ministry added that it would take the necessary steps to protect its legitimate interests and impose sanctions on relevant US personnel and entities.

The rising tensions between the US and China raised concerns over a potential cold war, causing the safe-haven appeal to emerging. As a result, the safe-haven Japanese currency increased, dragging the USD/JPY pair down. However, the US dollar remained under pressure, due to the downbeat economic outlook in the US, as the economy is struggling with the second wave of coronavirus. This also added further to the losses of the USD/JPY pair.

Meanwhile, on Wednesday, Philadelphia Federal Reserve Bank President, Patrick Harker, said that the United States has failed to control the coronavirus and the uncertainty over how much the pandemic will affect the economy remained high. Harker said that, based on average forecasts, the GDP growth could drop by 20% in the first half of this year and then grow by 13% in the second half. He also declared that the economy could decline by about 6% this year.

He suggested that the US central bank should consider holding off on raising interest rates until the inflation is above the 2% target. Harker’s comments showed that the failure of the US to get the virus under control was creating more economic uncertainty.

On the other hand, the Bank of Japan issued its monetary policy statement on Wednesday, in which they said that the country’s economy was likely to improve gradually in the second quarter of this year. However, the pace of recovery will remain moderate, as the impact of the coronavirus pandemic persists. They also warned that uncertainty over the economic outlook was extremely high, due to various risks, including the second wave of the virus and possible disruptions to the banking system.

The Central Bank of Japan kept its deposit rates at -0.1%, holding the 10-year Treasury yield target at 0%. It made no changes in its asset-buying and lending programs, and in new quarterly forecasts, it expects the economy to shrink by 4.7% in the first quarter, from the range of -5% to -3% that was projected in April. The cautious outlook from the Bank of Japan provided some support to the USD/JPY pair on Wednesday, after weighing a little on the Japanese Yen.

The USD remained strong on the data front, after Wednesday’s Economic Docket release that showed a rise in Industrial Production to 5.4% and of Import Prices to 1.4%. The Capacity Utilization Rate also increased, rising to 68.6%, and the Empire State Manufacturing Index was also up to the 17.2 level. The strong US dollar also kept the additional losses in the USD/JPY pair under pressure, boosted by the risk-off market sentiment.