Daily Brief, July 21 – Everything You Need to Know About Gold Today!  - Forex News by FX Leaders 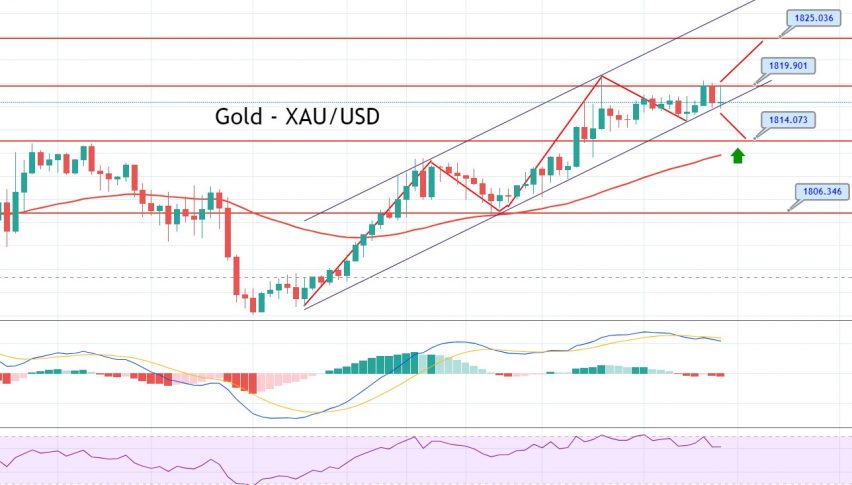 Daily Brief, July 21 – Everything You Need to Know About Gold Today!

Team FXLeaders managed to close another 80 green pips in gold at the beginning of the new week. Prices for the yellow metal closed at 1,817.48, after placing a high of 1,820.50 and a low of 1,805.57. Overall, the movement of gold remained bullish throughout the day. The precious metal surged to a new eight-year high, to over 1,820 on Monday, on the back of increasing coronavirus cases and hopes for increased stimulus measures from Congress.

This week US Congress will return, as it faces a critical deadline for the passing of another coronavirus aid bill, as the pandemic is once again surging in the United States. The lawmakers in the divided Congress will need to resolve broad differences regarding the best tool for the job – one that will be able to blunt the spread of the outbreak, whilst at the same time lifting the economy, which has been injured by the virus crisis. Lawmakers will also have to compete with President Trump, who has repeatedly attempted to soften the severity of the pandemic, as it could jeopardize his chances of winning the next election.

The negotiations between lawmakers will also cover the millions of Americans who have been jobless since the start of the pandemic. After July, the unemployment insurance that people were being paid, at a rate of $ 600 per week, will no longer be available, even if the US unemployment rate remains higher than it was at any point during or after the 2008 financial crisis. The US has now reported nearly 3.8 Million cases of COVID-19 and more than 140,000 deaths due to the virus. The increased number of cases has forced California, the country’s largest state, to pause its economic re-opening plans.

The Senate Majority Leader Mitch McConnell, together with Treasury Secretary Steven Mnuchin and others, met at the White House on Monday, to discuss another stimulus measure. The talks were held due to the fact that the unemployment benefit expansion was nearing expiration.

The US stocks slipped on Monday, ahead of this meeting, as investors awaited the updates on another coronavirus stimulus package. The decreased US stocks gave safe-haven metal prices a push on Monday, resulting in a rise to the highest levels since 2011. Furthermore, the signs that European Union countries were willing to compromise on a 1.8 trillion euro coronavirus stimulus plan, also ensured sustained support for the yellow metal bullion on Monday. The US Centers for Disease Control and Prevention warned on Monday, that given the rise in the number of coronavirus cases worldwide, the cases and deaths could rise this autumn and winter. This also raised concerns and uncertainty, which fueled the already rising gold prices.

The latest coronavirus (COVID-19) numbers from Texas and LA County showed a mild reduction in the coronavirus figures, compared to the recent high statistics. While both reported a total of 10,564 new cases on Monday, Texas remains the worst affected, with additional 7,404 cases taking the total for the state to 332,434. On the flip side, there are a total of 159,045 cases in LA County, with the latest additional cases amounting to 3,160.

Apart from the virus woes, the on-going war between the world’s top two economies is still not showing any signs of subsiding, as the US policymakers were set to levy heavy sanctions on members of China’s ruling party. This action could push the dragon nation towards rough retaliation, and fears of this have become a key factor, keeping a lid on any further optimism in terms of risk sentiment.

As a result, the broad-based US dollar failed to gain any positive traction, edging lower on the day. However, the losses in the US dollar could be attributed to the uptick in the US stock futures. The losses in the US kept the gold prices higher, as the price of gold is inversely related to the price of the US dollar. Meanwhile, the US Dollar Index, which tracks the greenback against a basket of other currencies, had fallen by 0.16%, to 95.623, by 10:09 AM ET (3:09 AM GMT). There was no macroeconomic release from the United States on Monday, and this kept the market at the mercy of updates related to the coronavirus and the stimulus package.

On Tuesday, GOLD prices are trading with a bullish bias, at the 1,819 level, and a bullish crossover on this level is pretty much likely to drive further buying in gold, up to 1,825. However, gold is in the overbought zone, and it may exhibit slight bearish correction to the 1,814 level, ahead of a further buying trend in the market.

The MACD and RSI are exhibiting mixed bias, as MACD is in the selling zone, while RSI is holding in a bullish zone. The bullish channel on the hourly timeframe and the 50 periods EMA are showing bullish bias in gold. Let’s consider taking a buying trade over the 1,819 level and selling below 1,814. Good luck!