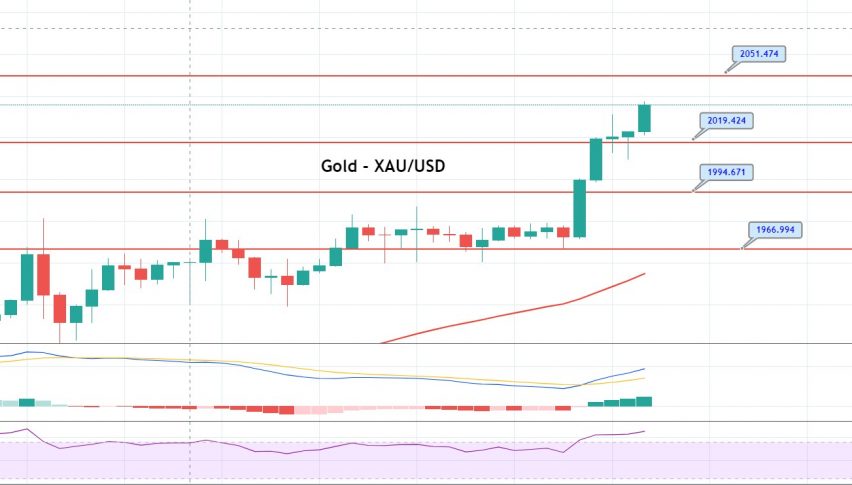 The GOLD prices closed at 2,018.96 after placing a high of 2,019.92 and a low of 1,967.09. Overall, the movement of gold remained bullish throughout the day. Gold surged to a record high on Tuesday, after the Republicans and the Democrats appeared closer to an agreement on new a stimulus to aid the coronavirus-hit economy. As investors expect more stimulus from the Federal Reserve, Wall Street edges up.

On Tuesday, a top US Senate Democrat said that new rounds of talks between the White House and the Democratic leaders in the US Congress were finally moving in the right direction for an agreement over the coronavirus relief fund to be reached. On this statement, gold bullion surged, taking the prices above the psychological level of $ 2,000 per ounce.

Gold rose on the confirmation that there has been a development in negotiations with Republicans on the new COVID-19 support program. Gold has risen by almost 32% so far this year, mainly supported by lower interest rates and widespread stimulus from central banks across the globe, to ease the economic blow from the coronavirus crisis.

On the US-China front, the two countries have agreed to conduct high-level talks on Aug 15, in order to assess Beijing’s compliance with the bilateral trade agreement signed earlier this year.

The Trump administration has been hammering China over the coronavirus outbreak, Hong Kong and the treatment of Uighurs’ in western China, which has resulted in a deterioration of US-China relations in recent months. Only a trade pact between the two financial giants has remained a matter of mutual concern, and both countries have decided to assess their trade deal on Aug 15.

Moreover, the Chief Executive of Microsoft Corp., Satya Nadella, has attempted to compile a takeover agreement, in order to acquire the operating rights for TikTok in the US, from its Chinese parent company, ByteDance Ltd. The agreement satisfies not only the companies and their shareholders, but also the two governments, who are in a constant bitter battle for technological clout.

Despite some easing in the US-China tensions, gold prices continued to surge above a record high of 2,000 per ounce, as investors were only focused on the US stimulus package. However, gold also drew support from another factor on Tuesday, when the head of the World Health Organization (WHO) said that while there was hope for the development of a vaccine against COVID-19, it was also possible that one might never be found.

Tedros Adhanom said, in a news briefing, that there was no silver bullet at the moment, and there might never be. He urged people to comply with measures like social distancing, hand-washing and wearing of masks.

More than 18 million COVID-19 cases globally and the death toll of 689,000 were alarming. Several vaccines, to prevent people from becoming infected with the virus, are now in Phase 3 clinical trials, but as yet, there is no actual vaccine available.

These comments also helped the gold price to rise to an all-time high for the first time in history.

The precious metal, GOLD , violated the psychological resistance level of 2,000, to trade at the 2,022 level, after placing a high of around 2,033. The daily closing of gold suggests strong a bullish sentiment among good traders, and despite entering the overbought zone, gold doesn’t seem to be slowing down in its bullish momentum. For the precious metal, resistance is likely to be found at around the 2,033 and 2,056.90 levels. In contrast, support can be found at around the 2,014.85 and 1,993.80 levels today. Good luck!