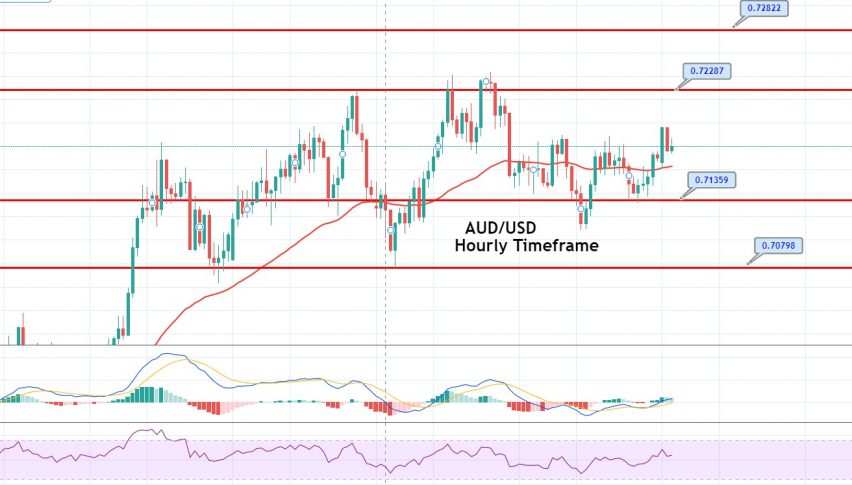 The AUD/USD closed at 0.71704, after placing a high of 0.71749 and a low of 0.71317. Overall, the movement of the AUD/USD pair remained bullish throughout the day. The Reserve Bank of Australia has declared that it will keep its official interest rates at a historical low for the next three years. The Bank expects that the job market will take at least three years to recover from the coronavirus pandemic.

At the House of Representatives Standing Committee on Economics, Governor Philip Lowe said that the cash rate, which is the interest rate on unsecured overnight loans between banks, would remain at the same low level for some time.

Mr. Lowe said that the board of banks had indicated that it will not increase the cash rate until progress has been made towards full employment, and the inflation is within the target range of 2-3%.

Despite the dovish comments by the RBA, the AUD/USD pair moved in an upward direction, because of the weakness of the US dollar. On Friday, the dollar was down, and it gave up some early gains, as doubts persisted over the global economic recovery from COVID-19.

The disappointing data from China, which was released earlier in the day, indicated a continuous but slow recovery in industrial production. The bigger-than-expected decline in the retail sales in China raised doubts over global economic recovery, weighing on the safe-haven US dollar. The weak US dollar then pushed the AUD/USD pair on Friday.

On the data front, the US Retail Sales data decreased to 1.2%, compared to the estimated 2.0%, which weighed on the US dollar, pushing the AUD/USD pair to the upside. Prelim Nonfarm productivity in the second quarter rose to the unexpectedly high level of 7.3%, in contrast to the expected 1.5%, weighing on the US dollar and adding strength to AUD/USD pair.

US Industrial Production declined to 3.0%, from the anticipated 3.1%, weighing on the US dollar, and this once again added strength to the AUD/USD pair.

However, the US-China review meeting between trade officials from both sides, which was scheduled to happen on Aug. 15, was postponed by both parties. It was delayed to allow China time to increase their purchases of US farm products. This also added to the gains of the Aussie, which is perceived as risky, on the last day of the week.