AUD/USD Supported Over Upward Trendline – All Eyes on the NFP!  - Forex News by FX Leaders 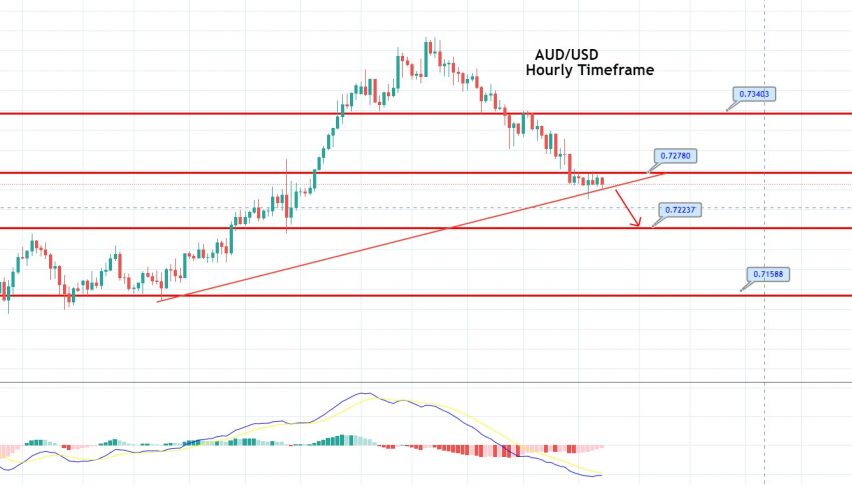 AUD/USD Supported Over Upward Trendline – All Eyes on the NFP!

The AUD/USD pair closed at 0.72729, after placing a high of 0.73394 and a low of 0.72648. Overall, the movement of the AUD/USD pair remained bearish throughout the day. The AUD/USD pair extended its decline of the previous day, dropping further, on the back of the faded risk sentiment and the improved demand for the US dollar.

From the US side, at 17:30 GMT, the Unemployment Claims figures were released, showing a drop to 881K last week, compared to the anticipated 955K, which bolstered the US dollar. At 18:45 GMT, the Final Services PMI from the US rose to 55.0, against the projected 54.8, also lending support to the US dollar. The strong US dollar weighed heavily on the AUD/USD pair, dragging it towards a low of 0.72648.

On the other hand, the increasing number of coronavirus cases from all over the world kept challenging the market risk tone, undermining the Aussie, which is perceived as risky, and putting further pressure on the AUD/USD pair.

On Wednesday, India broke the US record for the highest number of new COVID-19 cases in one day, after reporting more than 78,000 cases in a single day. The rise in the number of coronavirus cases in India was reported after the government eased the country’s pandemic restrictions.

Meanwhile, in August, Australia reported its biggest decline in the quarterly GDP since 1991 – when record-keeping began – due to the economic impact of the coronavirus crisis. It is also worth mentioning that the United States refused to join the World Health Organization’s global effort to develop and distribute a COVID-19 vaccine. All these tensions kept weighing on the risk sentiment in the market, and supported the downward trend of the AUD/USD pair on Thursday.

At the moment, trading in the AUD/USD pair is sharply bearish, at the 0.7268 level, gaining immediate support at 0.7250 and resistance at 0.7277. Violation of this range could determine the where the AUD/USD pair is headed next. On the higher side, the pair might find resistance at the 0.7340 level and support at the 0.7225 level today. The trend will be determined after the release of the NFP figures later today, during the US session. Good luck!

Bitcoin Plunges Over 9% - A Quick Technical Outlook!
15 hours ago