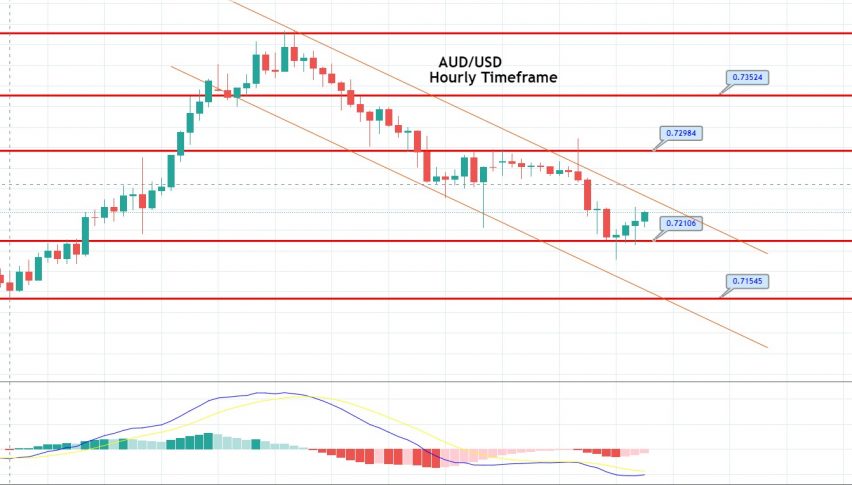 Today, during the European trading session, the AUD/USD currency pair managed to put a stop to the losses during the Asian session and regain some positive traction just above the 0.7230 level, despite the downbeat market sentiment and the strength of the broad-based dollar. However, the ongoing bullish sentiment surrounding the currency pair could be associated with China’s inflation data for the month of August.

The stabilizing coronavirus figures in Australia could be considered as the supporting factor for the currency pair. However, the risk-off market sentiment, triggered by the tensions between Washington and Beijing, became the key factor that kept a lid on any additional gains in the currency pair. Another factor that might be capping the gains could be the fresh concerns over rising numbers of coronavirus cases in the US. Moreover, the further delay in the COVID-19 aid package and the uncertainty surrounding the Brexit have added an extra burden on the market trading sentiment. Meanwhile, the ongoing strength of the broad-based US dollar, backed by the safe-haven demand, is also limiting the gains for the currency pair. The AUD/USD currency pair is currently trading at 0.7231 and consolidating in the range between 0.7192 and 0.7242.

It is very disappointing that the optimism over the coronavirus (COVID-19) vaccine/treatment was overshadowed by the latest reports that suggested a pause in AstraZeneca’s COVID-19 vaccine trials. AstraZeneca referred to the latest stop in final trials of the coronavirus (COVID-19) vaccine as “routine and voluntary.” As a result, approximately 9 drug-makers recently stepped back from doing further trials of their virus vaccines, unless “safe” research results are found.

Another factor that could be undermining the market trading sentiment is the rising tensions between the United States and China. US President Trump earlier imposed punitive measures on the Asian giant. As a result, China announced new visa restrictions to counter the Trump administration’s action against the Dragon Nation. The fresh headlines suggesting that the US is considering banning some or all products made with cotton from China’s Xinjiang region could also be fueling tensions. President Donald Trump’s election operations seem to be targeting the Dragon Nation. He also promised to “stand tough” on China. Apart from this, the  gloomy Brexit headlines also weighed on the market trading sentiment, which eventually increased the safe-haven demand in the market.

Besides the US, the Dragon Nation and its neighbor India also played a major role in undermining the trading sentiment. The tensions were fueled after China accused India of serious military provocation, after an incident of firing reportedly took place overnight on the Line of Actual Control (LAC), in the Eastern Ladakh sector. India’s military warned China, stating that five Indian civilians were kidnapped in a border state last week. In turn, this undermined the Australian dollar, which is perceived as a risky currency, and capped any further upside momentum for the currency pair.

On the flip side, the lack of progress on the fiscal package also weighed on the risk tone. Notably, the Democrats are bothered by the Republicans’ $ 300 billion proposal for the coronavirus (COVID-19) aid package, and have indicated a further delay in the much-awaited stimulus. In turn, this weighed on the market sentiment and became the key factor that capped any further upside momentum for the currency pair.

On the USD front, the broad-based US dollar succeeded in maintaining its positive traction, edging higher on the day amid a mixed sentiment. The gains in the US dollar were further bolstered by the ongoing upsurge in the US Treasury bond yields. However, the modest gains in the US dollar turned out to be the major factor that capped the pair’s upside momentum. Meanwhile, the US Dollar Index, which tracks the greenback against a basket of other currencies, had risen by 0.07%, to 93.502, by 10:01 PM ET (3:01 AM GMT).

On the contrary, the risk barometer recently gained some support from China’s  inflation data for the month of August. On the data front, China’s August Consumer Price Index (CPI) matched the expectations of 2.4% YoY, while the Producers Price Index fell from -2.4% from the previous -2.0%, proving the market consensus right. Australia’s Home Loans surged by 10.7%, versus the predicted 3.1% in July. Earlier in the day, Australia’s Westpac Consumer Confidence for September reversed the previous reading of -9.5%, hitting the +18% mark. In the absence of any major data/events on the day, the market traders will keep their eyes on the movement of the USD. The risk catalysts, like geopolitics, the virus woes, and of course, the Brexit, will be key to watch for the fresh direction.

Trading in the AUD/USD pair is slightly bullish, in the wake of retracement at the 0.7225 level. The AUD/USD pair may find immediate support at around the 0.7190 level, and violation of this level could open further room for selling, until the 0.7139 level. On the higher side, the AUD/USD may find resistance at the 0.7249 level, and above this, the next resistance could be found at around 0.7301. Good luck!