Gold Flirts with the 100 Daily SMA, as the Tumble Continues - Forex News by FX Leaders 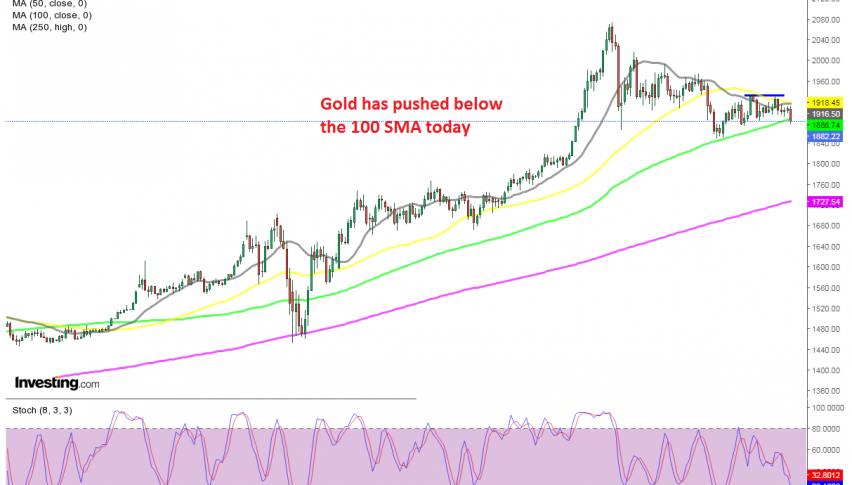 Gold Flirts with the 100 Daily SMA, as the Tumble Continues

The bearish move is picking up pace

Today has been a strange day for gold; the risk sentiment has turned negative in financial markets, sending risk assets such as stocks down, and safe havens such as the CHF and the JPY higher. But gold, which is the ultimate safe haven is falling today.

Gold has been really bullish this year, due to the enormous uncertainty, climbing above $ 2,000 and making new highs. But the bullish trend ended in the first week of August and the trend has been bearish since then. The 20 SMA (gray) turned into resistance, while the 50 SMA (yellow) turned into support at first.

The 50 SMA was eventually broken on the daily chart, and it turned into resistance, putting a lid on retraces higher in gold. The 100 SMA (green) turned into support for gold, but this moving average is under threat right now, as sellers keep pushing down.

Otherwise, if the candlestick closes below the 100 SMA today, we might try to sell the retraces up at that moving average. We have already had a few winning signals selling gold this week, so please follow us on the signals page for several trade signals on a daily basis.

Selling AUD/USD at the 100 SMA, Which Has Turned Into Resistance
13 hours ago
Comments