Will NZD/USD Bounce Off the 50 SMA? - Forex News by FX Leaders 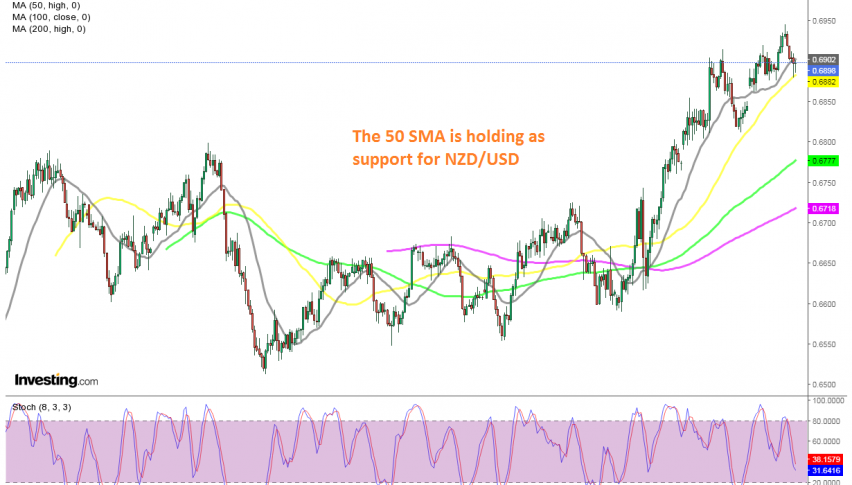 Will NZD/USD Bounce Off the 50 SMA?

The retrace down should be complete for this pair

NZD/USD used to be quite bullish since march, until late September. But as the USD started to recuperate some ground and the sentiment turning softer due to the softening global economy that month, risk currencies such as the NZD lost the momentum and NZD/USD was trading sideways mostly, with the 100 SMA acting as support on the daily chart.

But, November has been a bearish month for the USD, which has turned NZD/USD bullish, after it bounced off the 100 SMA. During this month, moving averages have been a good job in providing support during pullbacks and pushing the trend higher for this pair.

The 20 SMA (grey) has done this job when the pace of the trend was strong, while the 50 SMA (yellow) has taken over when the pullbacks were a little deeper. Last night we saw a retrace down to 0.69 where the 20 SMA was standing, so we decided to go long, opening a buy forex signal. Today, the price fell 10 pips lower below the 20 SMA, but the 50 SMA seems to be holding now. let’s hope there is a bounce coming up from here, since the selling has stopped now.

EUR/GBP Breaks the 50 SMA as the Retrace Continues, but Stalls at the 100 SMA
3 days ago
Comments