US Dollar Dips as Yellen Calls For More Stimulus, Without Worry of Debt - Forex News by FX Leaders

US Dollar Dips as Yellen Calls For More Stimulus, Without Worry of Debt

Early on Wednesday, the US dollar is trading bearish amid rising expectations for more stimulus measures even as the Euro makes gains on the back of a better than expected economic sentiment reading from Germany – the Eurozone’s largest economy. At the time of writing, the US dollar index DXY is trading around 90.32.

Biden’s Treasury Secretary nominee Janet Yellen has called for increased spending in pandemic relief without worrying about rising debt – a sentiment that has scared investors away from the perceived safety of the US dollar. While rolling out of more stimulus measures would aid in economic recovery, it would also force the US government to borrow more, increasing the public debt, which in turn dents investor confidence in the US dollar.

The weakness in the US dollar has also helped commodity currencies AUD and NZD trade bullish. However, analysts expect gains in riskier currencies to be limited by weak economic data releases even though the market sentiment may be lifted by hopes of more stimulus.

Meanwhile, the Euro gained as much as 0.4% against the greenback during the previous session after Germany’s ZEW economic sentiment index surged from 55 in December to 61.8 in January, raising hopes for economic recovery. The increased confidence has increased expectations that the German economy could be on its way towards a rebound after the damage driven by the coronavirus pandemic and resulting lockdowns. 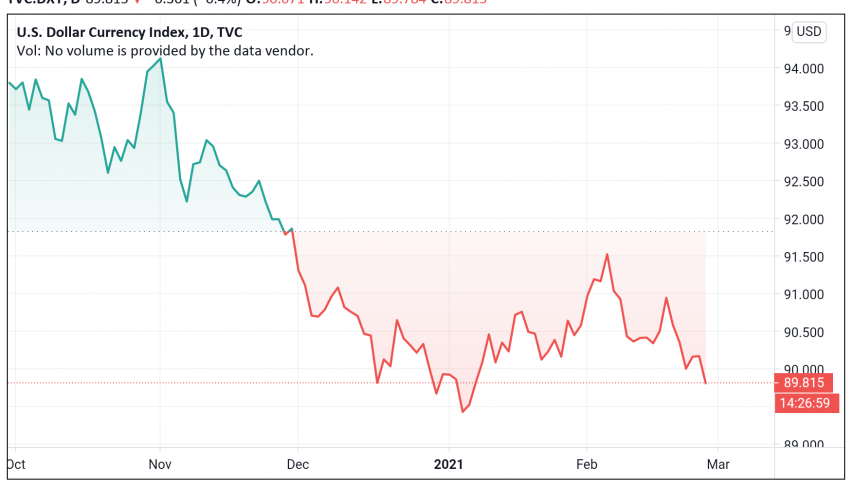