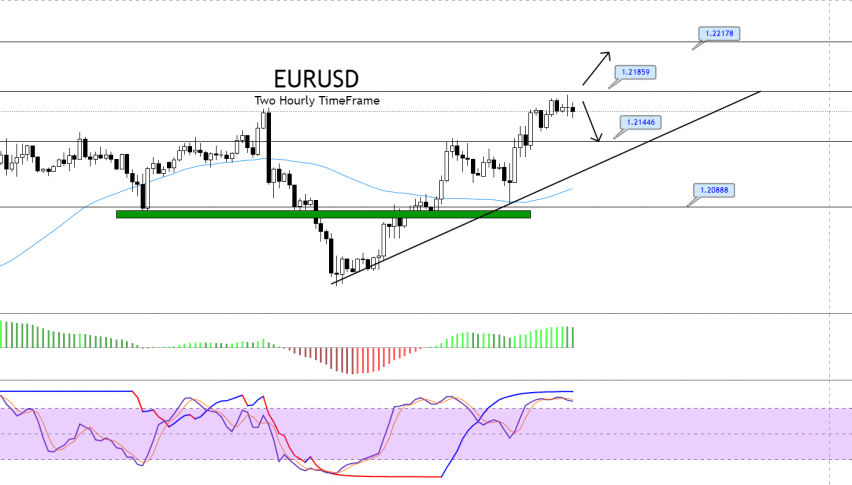 The EUR/USD currency pair closed at 1.21579, after placing a high of 1.21691, and a low of 1.20910. The EUR/USD pair extended its gains for the third consecutive session on Monday, due to the weakness of the US dollar, restoring optimism in the market.

On a 10-year note, the US Treasury Yield almost reached a one-year high at 1.394%, during the trading hours on Monday, but it then started to decline, which affected the demand for the greenback. The US dollar was under heavy pressure on Monday, dropping by almost 0.4%, to 89.98 – its lowest level in six weeks.

The decline in the US dollar resulted from the rising hopes of additional financial support from the US government. US President Joe Biden’s proposed $ 1.9 trillion stimulus package is expected to be approved by the end of this week. This raised inflation concerns, eventually weighing on the greenback.

On the data front, at 20:00 GMT, the CB Leading Index for January was released, indicating a rise to 0.5%, against the previous 0.4%, which supported the US dollar and capped further gains in the EUR/USD pair. From the European side, at 14:00 GMT, the German Ifo Business Climate for February came in at 92.4, which was up compared to the expected 90.5. This supported the Euro and resulted in additional gains in the EUR/USD. At 19:00 GMT, the Belgian NBB Business Climate came in at -4.4, against the expected -7.2, also boosting the Euro and pushing the EUR/USD pair higher. Meanwhile, European Central Bank Chief Christine Lagarde said that the ECB was monitoring nominal government bond yields closely, as the policymakers were uncomfortable with the recent surge in yields.

According to Lagarde, they are watching the government bond yields carefully, so that they can act in time to prevent rising yields from undermining economic recovery from the pandemic. The yields are rising worldwide, over bets that vaccinations will soon enable countries to end coronavirus restrictions, which will lead to more consumer spending. The yields are also rising because of the fiscal stimulus hopes that could boost inflation.

At the European Parliament session on Monday, Lagarde said that Sovereign Yields were particularly important, as banks use those yields as a reference when setting the price for loans to households and firms. She also said that the ECB was closely monitoring the evolution of longer-term nominal bond yields, and that the European Central bank would continue to support all sectors of the economy by preserving favorable financing over the pandemic period. Lagarde’s comments also added strength to the single currency, pushing the EUR/USD pair higher on Monday.

EUR/USD Violates Upward Channel - A Quick Sell Signal!
7 hours ago
Crude Oil Slips to $ 59.52, Over Supply Issues and a Stronger Dollar in Play!
During Tuesday's early Asian trading session, the WTI crude oil failed to extend its previous day winning streak and dropped near below the
7 hours ago