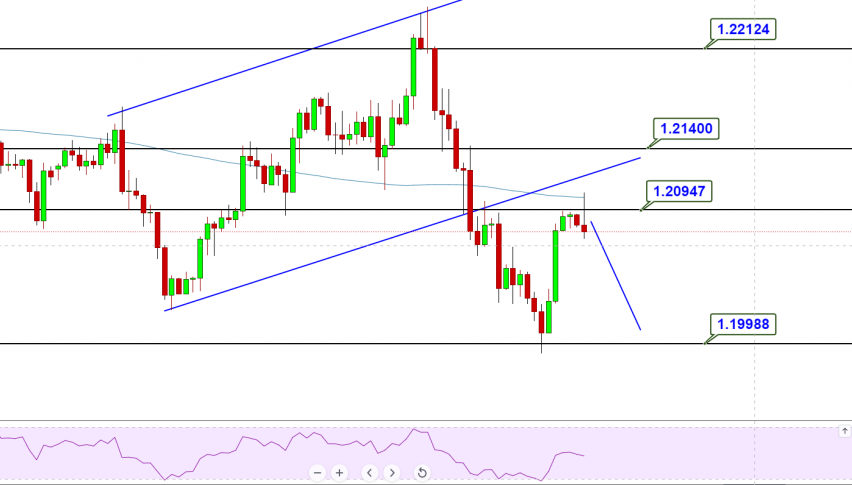 The EUR/USD pair closed at 1.20898, after placing a high of 1.20941, and a low of 1.19914. After posting massive losses for two consecutive days, the EUR/USD pair reversed its momentum on Tuesday and started rising on the back of the weak US dollar.

In the first half of the day, the EUR/USD prices fell sharply, to their lowest level since February 5, amid the weak macroeconomic data from Europe and warnings by the World Health Organization. The WHO warned late on Monday, that the number of new coronavirus infections globally rose last week for the first time in seven weeks.

The Director-General of the WHO, Tedros Adhanom Ghebreyesus, warned that it was too early for countries to rely solely on vaccination programs and abandon other measures. This warning came in after European countries discussed lifting the restrictions on movement that were put in place to combat the virus. The WHO warning lifted the risk-flows from the market, weighing on the risky EUR/USD pair. However, the losses in the EUR/USD currency pair were recovered in the second half of the day, as the weakness of the US dollar began pushing the EUR/USD pair higher.

Despite the worse-than-expected German Retail Sales data, the EUR/USD pair rose on Tuesday, as the Euro maintained the upper hand over the US dollar. However, Euro investors are becoming more concerned about the outlook for the largest economy within the Eurozone, as the country has plans to extend its coronavirus lockdowns until March 28. However, the government will allow small private gatherings from Monday, as mentioned in a draft agreement between Chancellor Angela Merkel and the heads of the federal states.
Despite the negative developments in Germany, which is the largest economy in the Eurozone, the EUR/USD currency pair kept rising on Tuesday, amid the broad-based weakness in the greenback, which was driven by the declining US Treasury yields. On a 10-year note, the benchmark US Treasury yields, which rose to a one-year high and pre-pandemic levels last week, declined on Tuesday, putting pressure on the US dollar, ultimately supporting the gains in the EUR/USD pair.

Amid the growing optimism that President Joe Biden’s proposed stimulus package, worth $ 1.9 trillion, could successfully pass through the Senate, the US dollar failed to rise against the shared currency Euro. The stimulus package was approved by the US House of Representatives last week and is now widely expected to clear through Senate this week; this weighed heavily on the US dollar and pushed the EUR/USD prices higher.

On the data front, at 12:00 GMT, the German Retail Sales for January came in, showing a decline to -4.5%, against the expected 0.2%, which weighed on the Euro and capped any further gains in the EUR/USD pair. At 13:00 GMT, the Spanish Unemployment Change was announced. It rose to 44.4K against the forecast of 10.5K, putting downside pressure on the Euro and dragging the EUR/USD pair prices down. At 15:00 GMT, the CPI Flash Estimate for the year came in. It remained flat with the projections of 0.9%. The Core CPI Flash Estimate also remained unchanged at 1.1%. From the US side, at 20:00 GMT, the IBD/TIPP Economic Optimism for March was released. It surged to 55.4, against the estimated 52.1, and supported the US dollar, capping any further gains in the prices of the EUR/USD. The Wards Total Vehicle Sales in the US for February dropped to 15.7M, against the estimated 16.4M, weighing on the US dollar and ultimately adding further to the gains in the EUR/USD prices.