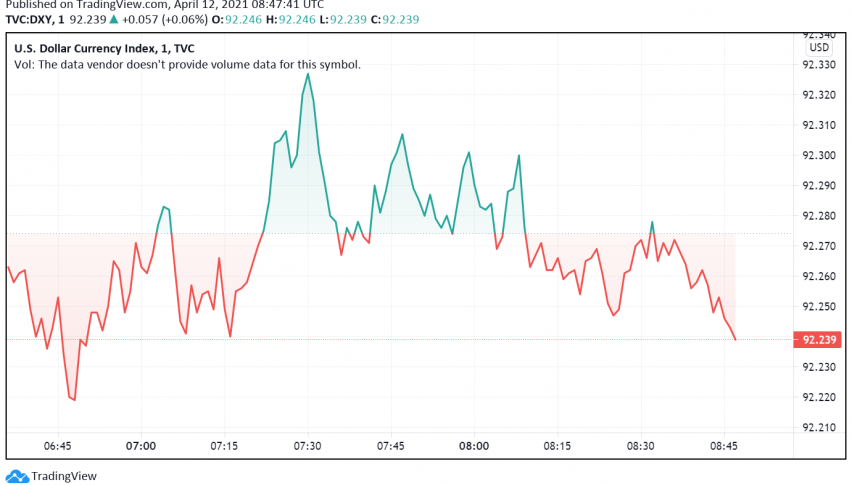 The US dollar is off to a cautious start at the beginning of a fresh trading week, holding close to an over two week low against its major rivals even as US Treasury yields strengthen again. At the time of writing, the US dollar index DXY is trading around 92.23.

With Fed officials repeatedly playing down the possibility of a spike in inflation levels across the US, Treasury yields as well as the greenback had eased lower after having strengthened to the highest levels seen in several months towards the end of March. Fed chair Jerome Powell has also maintained that while prices could rise in the near term owing to pent-up demand as the economy recovers, their effects could be short-lived and would not require any reaction from the central bank.

On Friday, however, the US dollar did manage to recover some of its losses after having traded weak through most part of the week, supported by a better than expected PPI reading. US producer prices rose at the fastest pace in more than nine years during March, increasing by 1% – coming in better than February’s 0.5% increase and the forecast for a 0.5% jump as well.

The better than forecast PPI figures for March raised expectations among traders that US could see inflation rise in the coming months, which has sent US Treasury yields higher again, driving renewed strength in the greenback as well. With the US economic recovery having been almost fully priced in, moves in the US dollar are likely to be affected by changes in bond yields in the near term, but could still enjoy some support from positive economic data releases in the coming days.