During Monday’s early European trading session, the safe haven metal gold succeeded in extending its previous session bullish performance and drew some further bids around well above the $1,800 marks mainly due to Friday’s released disappointing U.S. monthly job data, which ultimately raised market expectations that the Fed will keep interest rates low for a longer period, which in turn, put some aggressive bearish pressure around the U.S. dollar and was seen as a key factor that provided a heavy lift to the dollar-denominated commodity. Moreover, the declines in the dollar were further bolstered by the market’s upbeat mood, which undermined demand for the safe-haven U.S. dollar and contributed to the yellow-metal gains.

Across the pond, the ongoing Brexit woes, the U.S. Colonial pipeline cyberattack, and increasing COVID-19 cases in Japan and India keep testing the market risk-on mood, which was seen as another key factor that provides some additional boost to the safe-haven-metal prices. On the bearish side, the prevalent upbeat market mood, triggered by the hopes of further stimulus from U.S. President Joe Biden and decreasing (COVID-19) cases in the West, turned out to be one of the key factors that kept the lid on any additional gains in the safe-haven-metal. In addition, the gains in the GOLD price were also capped by the reports suggesting that the E.U. signed a heavy deal with one of the global COVID-19 jab leaders, Pfizer-BioNTech, which put some positive impact on the market trading mood. As of writing, the bullion price is trading at 1,835.19 and consolidating in the range between 1,830.16 and 1,839.26. Moving on, the traders seem cautious to place any strong position ahead of the U.S. inflation data, including the Core Consumer Price Index, which is due later in the week.

Despite the ever-increasing coronavirus (COVID-19) cases in India, Japan, and Brazil, the market trading sentiment managed to extend its previous bullish performance and hit the record high with 2,738 on the day. However, the prevalent bullish bias was mainly sponsored by hopes of further stimulus from U.S. President Joe Biden and decreasing coronavirus cases in the West. Besides this, the upticks were further bolstered after the E.U. managed to sign a heavy deal with Pfizer-BioNTech to enable the bloc to meet the speed with other leading countries like the U.S., the U.K., and Israel. Therefore, the bullish bias surrounding the market sentiment was seen as one of the key factors that kept the U.S. dollar under pressure.At the USD front, the broad-based U.S. dollar failed to extend its early-day bullish performance and turned sour during the early European session amid an upbeat market mood, which tends to undermine the safe-heaven U.S. dollar and contributes to gains in gold. Moreover, the losses in the U.S. dollar could also be associated with renewed expectations for the low-interest record rates, which were triggered after the U.S. disappointing employment report. At the data front, the non-farm payrolls rose by 266,000 during the month, well below the 978,000-rise in forecasts. Meanwhile, the unemployment rate also grew to a higher-than-expected 6.1% in April. However, the disappointing figure could be attributed to a lack of workers and raw materials, even as an improving COVID-19 situation and government stimulus measures helping the country’s economy recover.

Conversely, the physical demand for the yellow metal in India, the world’s second biggest gold consumer, dropped during the previous week due to ever-increasing coronavirus COVID-19 cases, which hit 403,736 on Sunday. This, in turn, was seen as a key factor that could cap further upside in the prices. Looking forward, the market traders will keep their eyes on U.S. inflation data, including the Core Consumer Price Index, which is due later in the week. In addition to this, the risk catalyst like geopolitics and the U.S. Federal Reserve officials, including Chicago Fed President Charles Evans and U.S. Fed Governor Lael Brainard’s speeches, will also be essential to watch. 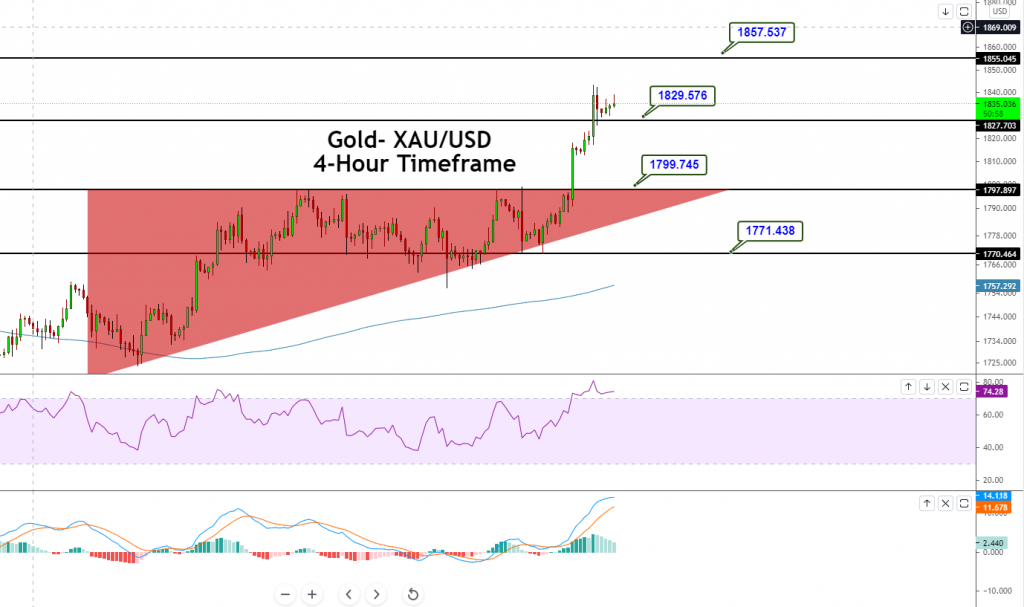 S3 1778.4
S2 1804.53
S1 1817.85
Pivot Point 1830.65
R1 1843.97
R2 1856.78
R3 1882.9On the technical side, GOLD is trading with a solid bullish bias at 1,835 level, having violated an ascending triangle pattern on the 4-hour timeframe. On the higher side, the precious metal is likely to face resistance at 1,843 level. A bullish breakout of 1,843 level can extend buying trend until the next resistance level of 1,857 level. On the lower side, the support continues to hold around 1,829 level. A bearish breakout of 1,829 level can extend selling bias until 1,804 level. Let’s consider taking a buy trade over 1,830.65 level today. Good luck!
BUY XAU/USD
Check out our free forex signals
Follow the top economic events on FX Leaders economic calendar
Trade better, discover more Forex Trading Strategies
Related Articles
Weekly Outlook, Jun 21 - 25, 2021: Top Economic Events to Watch This Week
The broad-based U.S. dollar is going to end this week on the bullish track and hovering near 2-month highs after U.S.
5 hours ago