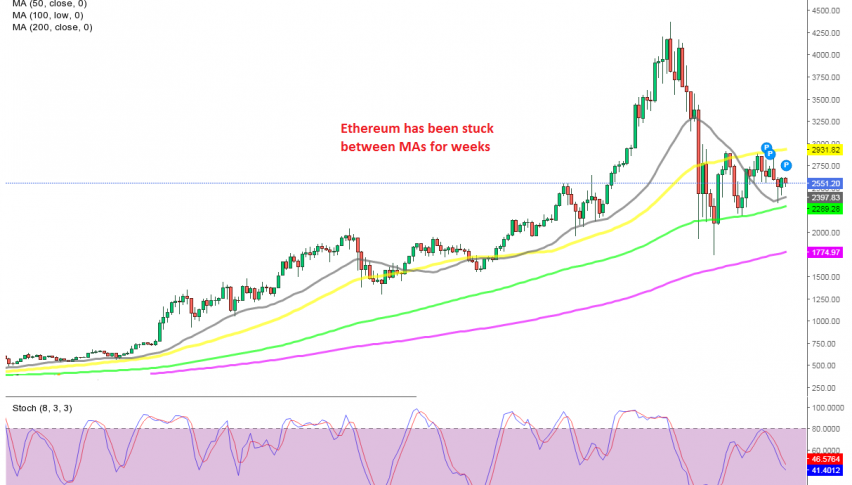 The lows are getting higher in ETH/USD
BUY ETH/USD

Ethereum was leading the cryptocurrency market in May, as Bitcoin and half of the crypto market were stagnating. The ETH/USD continued its bullish momentum, reaching $4.375 as shown on the daily chart above.

But, the reversal in the crypto market came in the middle of May, and Ethereum crashed lower, losing around 60% of its value. However, the 100 SMA (green) held as support, despite being pierced, and we saw a bounce off that moving average.

But there was no follow through, as the 50 SMA (yellow) turned into resistance at the top. That moving average has been provided resistance several times since then, so it has turned into the ultimate resistance indicator for ETHEREUM.

At the bottom, the 100 SMA has been holding as support, although this week the 20 SMA (gray) has taken over that job, with lows getting higher. That’s a bullish sign, and yesterday Ethereum buyers tried to push higher after the president of El Salvador announced that his country would accept Bitcoin as legal tender.

But today, once again, we are not seeing a follow-through. So, the uncertainty in the crypto market remains, although the daily chart still points up, as lows keep getting higher. It seems like the crypto market is waiting for a reason to resume the bullish trend, therefore we are holding onto our buy signals in the crypto market, where we have quite a few trades open.