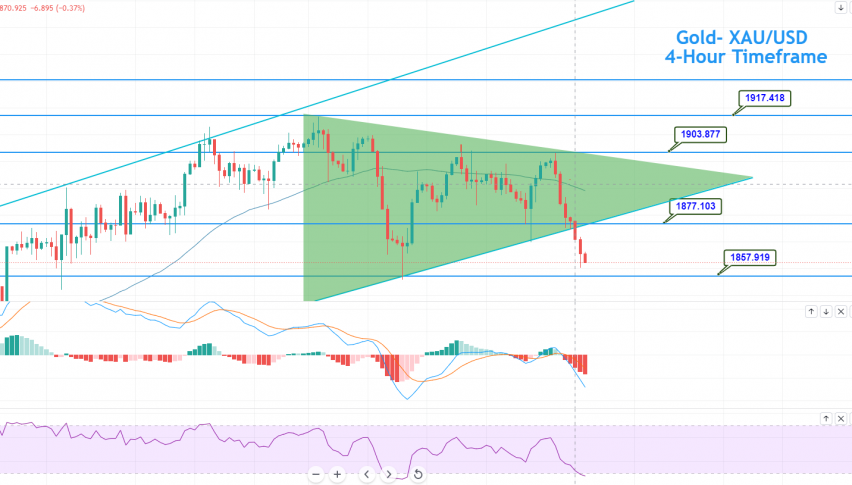 During Monday’s Asian trading hours, the safe haven metal, gold, failed to halt its overnight bearish performance, taking some additional offers around the $1,860 level, as upbeat US data and chatter over President Joe Biden’s infrastructure spending plan left a positive impact on the market trading sentiment. Meanwhile, the receding coronavirus (COVID-19) woes in some key economies have further boosted the market trading mood, which was seen as another critical factor that weighed on the safe-haven yellow metal.

The prevalent bullish bias surrounding the US dollar has also played a significant role in undermining GOLD, the price of which is inversely related to the price of the greenback. However, the US dollar recovered from a low of 89.9570, reaching a high of 90.6110 on the day, with some major support from the previously released upbeat US data. On a different note, the absence of any fresh surprises from the Group of Seven (G7) meeting, which was concluded over the weekend, probed the risk-on mood and helped to limit any deeper losses in the gold price. Meanwhile, the losses were also capped by the cautious sentiment ahead of this week’s Federal Open Market Committee (FOMC) meeting. The yellow metal is trading at 1,864.80, and consolidating in a range between 1,860.37 and 1,877.86.

Despite the fact that the the Group of Seven (G7) meeting did not result in any new surprises, the market trading sentiment managed to extend its positive performance of previous week. It drew some further bids around an all-time high above 4,238.40 on the day. This was witnessed by the positive appearance of Asia-Pacific stocks and upticks in the S&P 500 Futures, which tend to highlight the risk-on mood. However, the upbeat market mood was mainly supported by the optimism concerning the coronavirus (COVID-19) vaccines and US President Joe Biden’s further plans regarding stimulus measures. Meanwhile, the upbeat figures from the US also played a significant role in supporting the market trading mood. The recent Australian approach, which involved signing fresh trade deals with the United Kingdom and firming up ties with Germany and Japan, which included agreements on lower-emission technology usage, had an additional positive impact on the market trading sentiment. In addition to this, the G7 leaders’ agreement to push COVID-19 vaccines and keep relief packages flowing also had a pleasing effect on market optimism. Meanwhile, the receding numbers of coronavirus cases in some major countries also had a positive impact. As a result, the positive movements in the market put a bid under the US stocks, which was seen as one of the key factors that put pressure on the prices of the safe-haven-metal.

On the other hand, the lack of significant data/events, coupled with a cautious mood ahead of this week’s Federal Open Market Committee (FOMC) meeting, is probing the market risk-on mood, which may help limit deeper losses in gold. Due to the pre-FOMC mood and the long weekend in Australia, China, and Hong Kong, the market traders will only focus on the US Federal Reserve’s meeting for further clues on the direction of the central bank’s monetary policy. Meanwhile, the updates over President Joe Biden’s infrastructure spending plan and the COVID-19 situation will continue to play a key role in the direction of bullion. 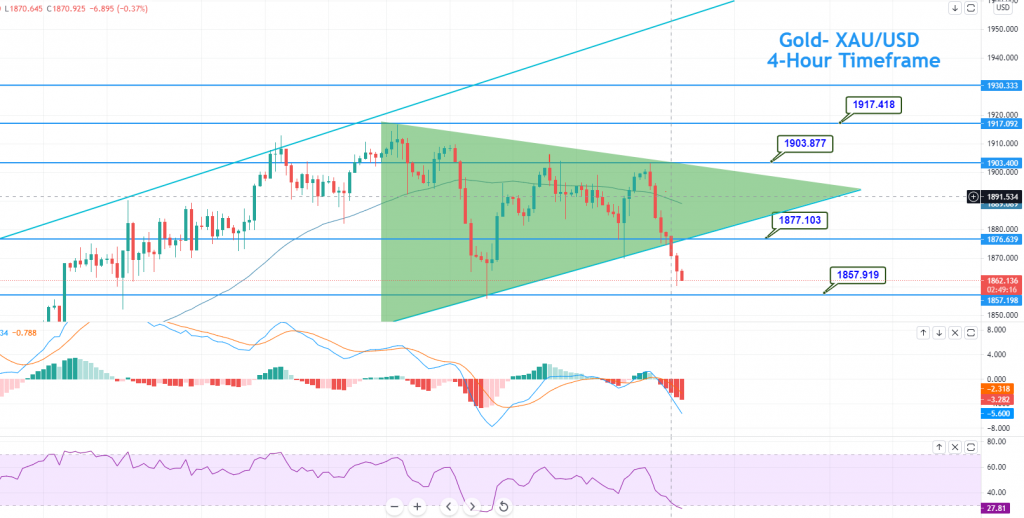 S3 1,827.94
S2 1,856.52
S1 1,867.13
Pivot Point 1,885.11
R1 1,895.72
R2 1,913.69
R3 1,942.28
Trading in GOLD is strongly bearish at the 1,862 level, as it has violated the upward trendline and the symmetrical triangle pattern at the 1,877 mark. On the lower side, the next support level for the precious metal remains at 1,857, extended by a double bottom support level. The other leading technical indicators, like the MACD and RSI, are supporting a strong selling trend. Gold may head further down today, until the 1,857 level. Good luck!
BUY XAU/USD
Check out our free forex signals
Follow the top economic events on FX Leaders economic calendar
Trade better, discover more Forex Trading Strategies
Related Articles

Gold Bullish Bias Dominates - Can it Target 1,836 Today?
9 hours ago

I follow reviews of Arslan. They are very accurate and reliable.