Bitcoin Crosses Over Pivot Point 42,733 – What to Expect Next? - Forex News by FX Leaders

Bitcoin Crosses Over Pivot Point 42,733 – What to Expect Next?

BTC/USD closed at $43,582.6, after reaching a high of $43,998.0, and a low of $40,607.0. After falling for three consecutive sessions, BTC/USD found support on Wednesday and reversed course. Bitcoin managed to recover almost all of its losses for the previous day, turning green amid the recent positive market developments.

On Wednesday, the online payment giant, PayPal, announced a new app offering multiple financial services that were previously foreign to the platform, including crypto capabilities. The new app has been launched in partnership with Synchrony Bank, to introduce the PayPal Savings service. Other new features include managing gift cards, paying with QR codes and accessing credit within the same app.

BTC/USD
It should also be noted that the new app will offer the ability to buy, hold and sell cryptocurrency, which means that the new app will have the basic functionality of a crypto wallet. This news added to the value of BTC/USD on Wednesday. Meanwhile, on Wednesday, Robinhood, a brokerage that went public recently, announced that it was adding crypto wallets to its app next month, to enable investors to send, receive and move cryptos in and out of the Robinhood app.This move was made in response to many complaints filed by clients who wanted to hold the cryptocurrency rather than just having exposure to the digital assets. Furthermore, the rising prices of cryptocurrencies and Robinhood’s revenue, including a large part of the cryptocurrencies, added to the decision. This news also added further to the gains in BTC/USD, as it supported the whole cryptocurrency market. Furthermore, the Internet Computer blockchain of the Dfinity Foundation has announced that it is bringing smart-contract capabilities into the Bitcoin network. This will potentially open the door to new use cases for the leading cryptocurrency.

According to the Dfinity Foundation, the Internet Computer will utilize its so-called chain key cryptography to integrate with Bitcoin. That will pave the way for smart contracts with the native BTC addresses, hosted directly on the Internet Computer. This news also boosted the gains in BTC/USD on Wednesday.

Moreover, the recent price dip in Bitcoin, which was driven by the problems of Evergrande, prompted more buying from El Salvador, which pushed the prices of BTC/USD higher on the board. After Bitcoin fell continuously for three consecutive sessions, amid fears of the collapse of Evergrande, El Salvador looked at it as an opportunity, and started buying a lot more Bitcoin, which helped push its prices to the upside Wednesday. 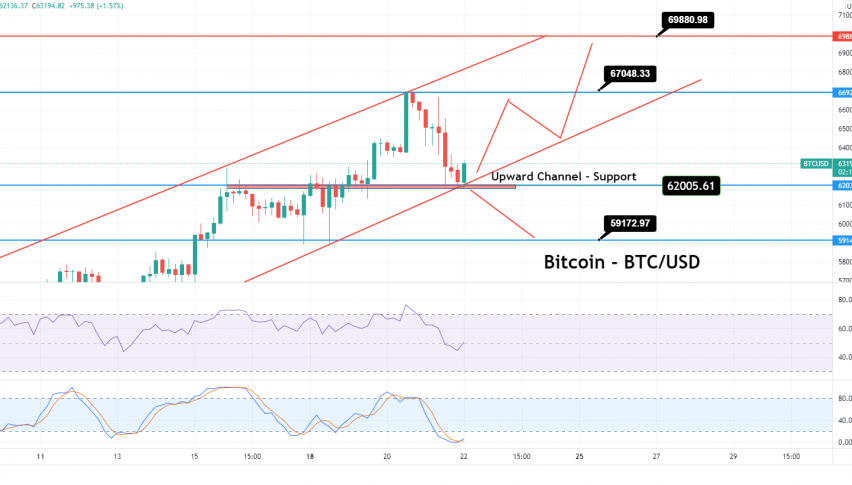