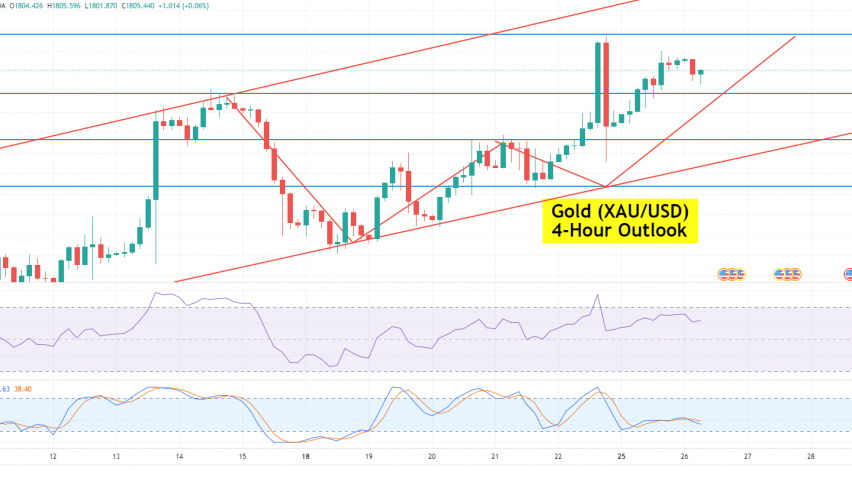 Good morning, traders. Gold closed at $1,809.10, after setting a high of $1,811.45, and a low of $1,793.05. On the back of inflation worries, gold continued its bullish momentum for the second consecutive session, holding above the $1,800 mark. Investors are waiting for the monetary policy decision at the next Federal Reserve meeting, as persistent worries over inflation have made them cautious about placing solid bets in the market. Although some believe that inflation will be transitory, the persistent element of pressure has raised questions about the outlook.

During Friday’s trading session, the price of gold dropped from its September high, after the Chairman of the Federal Reserve, Jerome Powell, said that high inflation is likely to abate next year. He also said that the central bank should start tapering asset purchases now, in order to reduce the amount of support to the economy, but interest rates should be left untouched for now.

Powell’s comments raised concerns that inflation is likely to last longer and will not be transitory, as previously stated by the Fed. This helped the safe-haven metal to gain some traction, and gold ended up rising on Monday, benefiting from its inflation-hedge status.

Investors are now awaiting the upcoming FOMC meeting, due to be held on Nov. 2-3. The markets are pricing higher inflation, and the participants believe that the current high level of inflation is no longer temporary. In such a situation, gold profits from its role as a store of value. Meanwhile, the US Dollar Index was recovering on Monday, after moving around the 93.84 level. On the other hand, the US Treasury Yield on the benchmark 10-year note fell to 1.62% on Monday, supporting the rise in the gold prices.

Furthermore, the US and Chinese governments have made some incremental progress in their economic and trade negotiations. Chinese Vice Premier Liu He and US Treasury Secretary Janet Yellen had their second call in about four months.

According to Chinese media, the call was described as pragmatic, candid and constructive. Both sides agreed that it was essential for China and the US to strengthen their communication and the coordination of macroeconomic policies, as this is a critical moment for world recovery.

Gold is still trading bullishly, with the current price at $1,804 per ounce. The precious metal is currently trading with a positive bias, just above the pivot point support mark of 1,803.77. The yellow metal ended with a bullish engulfing candle over the pivot point mark, suggesting that the bullish trend is likely to continue.

Furthermore, on the technical side, gold is supported by a bullish bias, as the RSI on the 4-hour timeframe remains above 50. Immediate support for gold is at 1,796; below this, the next levels of support are at 1,782 and 1,778. On the optimistic side, the next resistance level for the precious metal remains at 1,809, and a breach at this level would expose gold to 1,827. There is a bullish bias over 1,796 and vice versa. Good luck!