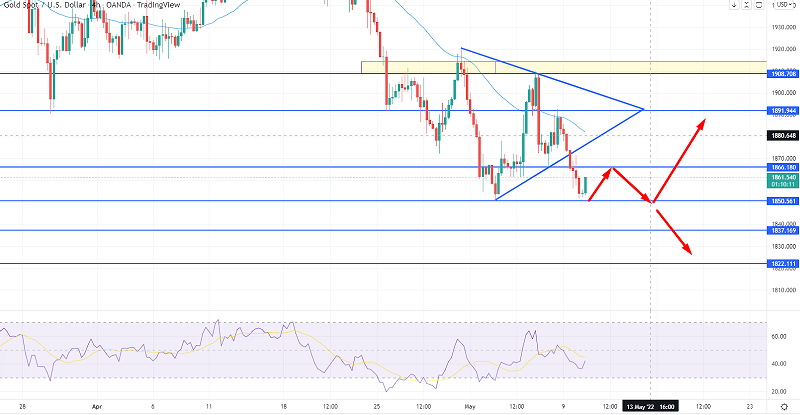 Gold (XAU/USD) prices flip around the short-term key horizontal support area near $1,850 as market sentiment dwindles during early Tuesday, having dropped the most in a week. Nonetheless, the yellow metal GOLD remains on the bear’s radar due to concerns about inflation and growth and the quote’s first daily close below the 200-day EMA since late January.

Although US stock futures were down half a percent by press time, a drop in Treasury yields appeared to have probed recent market pessimism. However, US 10-year Treasury yields have fallen back to sub-3% levels after reaching a new high in November 2018, the day before.

It’s worth noting that rising concerns about economic growth, as rising inflation forces central bankers to tighten monetary policies, appeared to have exhibited a stellar display of risk aversion on Monday. Worsening living conditions in China and Russia’s ignorance of global outrage over the invasion of Ukraine exacerbated the gloomy mood.

Looking ahead, gold traders should keep an eye out for risk catalysts for a new surge ahead of the US Consumer Price Index (CPI) data for April on Wednesday.

Gold price resumes its negative trading to move below the bearish channel’s resistance that appears on the chart, and the way is open to achieve our much awaited target of 1850, noting that the continuation of the bearish wave requires holding below 1890.

Today’s trading range is expected to be between 1850 support and 1890 resistance.