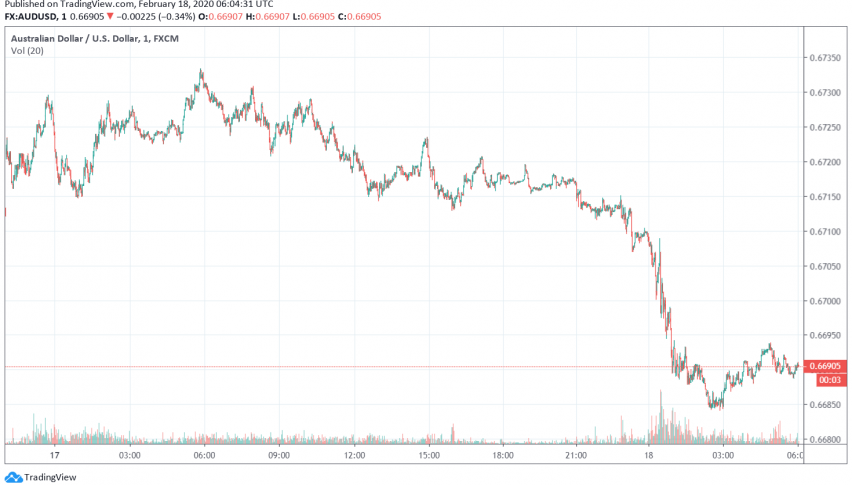 The Australian dollar is trading bearish early on Tuesday against the US dollar after the Reserve Bank of Australia (RBA) came out sounding more dovish about its interest rates and hinted that it could consider further easing in its monetary policy. At the time of writing, AUD/USD is trading at around 0.669.

AUD/USD lost around 0.3% of its value after the RBA held interest rates steady at 0.75% during its first monetary policy meeting of 2020. While this was mostly expected by markets, the central bank also hinted that it would consider easing its monetary policy even further based on the state of the Australian labor market.

In its meeting, the RBA also touched upon the prevalent coronavirus outbreak, stating that it was a “material risk” to China’s economy, and by extension, could also have an impact on the Australian economy which is closely tied to China due to trade. The RBA sounded optimistic about an uptick in mining and investment in infrastructure as well as recovery in the housing sector, which could support economic growth in Australia.

Check out our free forex signals
Follow the top economic events on FX Leaders economic calendar
Trade better, discover more Forex Trading Strategies
Related Articles
AUD/USD Coming Off the Highs After 2022 Inflation Surge, As Risk Sentiment Abates
Overnight we had the CPI consumer inflation report from Australia, with AUD/USD being on a bullish trend for a few months
1 day ago
GBP/USD Buyers Retest the 50 Weekly SMA Ahead of Tomorrow's CPI Report
GBP/USD was rejected by the 50 SMA early in December, but is quickly back at it as the USD resumes decline on softer FED rhetoric
1 week ago