Gold Heads for March Highs, After Bouncing Off the 50 SMA - Forex News by FX Leaders 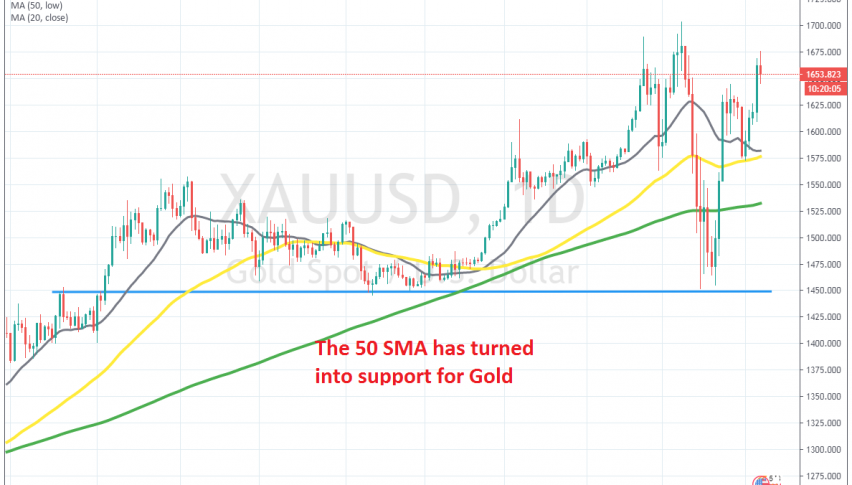 Gold Heads for March Highs, After Bouncing Off the 50 SMA

Gold is eyeing the previous highs

GOLD has been bullish for around two years now. We saw a slight pullback in Q4 of last year and Gold retrace lower, losing around $100. But, the decline stopped at around $1,450 and the bullish trend resumed again once the new year began, as tensions grew in the Middle East and then came the outbreak of coronavirus.

Safe havens benefit during such times and Gold surged above $1,700. But, in the second and the third week of this March we saw a severe pullback in safe havens, as well as risk assets, which seemed strange, especially for safe havens, since they are supposed to rally in difficult times.

But, the USD attracted strong bids as a world reserve currency, which was stronger than the demand for safe havens. Gold lost around $250, but the previous support at $1,450 held again. Gold bounced nearly $200 higher, but at the beginning of last week we saw another pullback lower.

But, the 50 SMA (yellow) turned into support on the daily chart this time and Gold turned bullish again. Now buyers are in charge and it seems like we are heading for last month’s highs. We will try to buy the pullbacks on smaller time-frames, like the H4 and H1 charts.