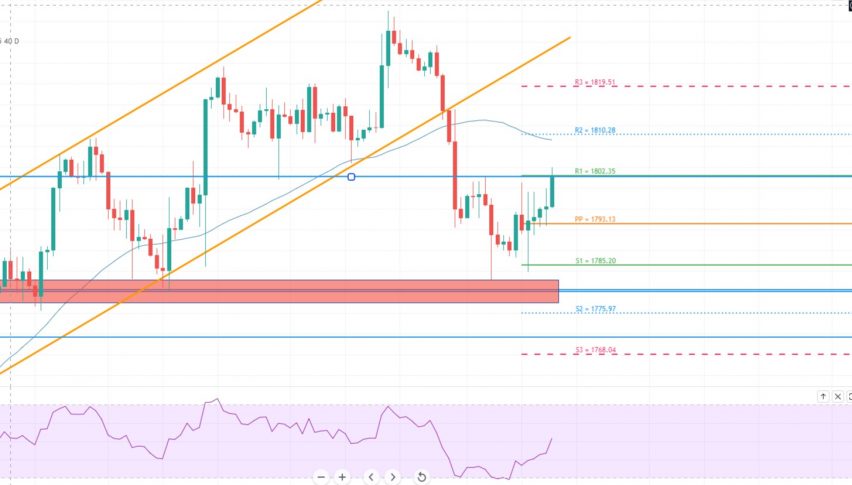 Gold Breaks Above the 1,794 Pivot Point Level – Brace For a Buy Trade

Gold closed at $1,796.55, after reaching a high of $1,803.20, and a low of $1,785.65. On Thursday, GOLD found a little support and managed to turn its momentum to the upside, after recovering some of its little losses from the foregoing days. After declining for four consecutive sessions, gold reversed its course on Thursday.

The US Dollar Index (DXY), which measures the greenback’s value against a basket of six major currencies, fell on Thursday, reversing its direction after dropping to the 92.3 level. The US Treasury Yields, on a 10-year note, also fell all the way down to 1.28%, adding to the pressure on the US dollar, which in turn boosted the yellow metal on Thursday.

The US currency was lower on the day, but Labor Department data showed that new jobless claims fell to the lowest level in nearly 18 months last week. This offered more evidence that labor shortages were delaying job growth, rather than a cooling off of the demand for workers.

Consumer credit dropped to 17.0 billion in July, falling short of the expected 24.5 billion, which weighed on the US dollar and added to the gains in gold. Furthermore, weekly jobless claims dropped to 310K, against the projected 343K, supporting the greenback and limiting the upward momentum in the gold prices.

According to Chicago Federal Reserve President Charles Evans, the US economy is not out of the woods yet, and challenges, like supply chain and labor market bottlenecks, continue, despite the strong economic recovery and the hopes surrounding coronavirus vaccines. Evans continued that one common element that has not been overcome, is the high level of uncertainty related to new variants of COVID-19, which have impacted health and safety within the country.

Meanwhile, US Federal Reserve Governor Michelle Bowman has said that the weak August jobs report will not throw the central bank off the plan it is developing to trim the $120 billion in monthly bond purchases later this year. She said that there was robust economic growth, even though the recent data was weaker than expected. She added that the goal of maximum employment was not very far away, and the series of strong jobs data could provide a way to begin the process of scaling back asset purchases this year.

US Central Bank Remains on track

The signals put out by US Federal Reserve policymakers, stating that the US central bank remains on track for the reduction of its massive asset purchases this year, despite the slowdown in job growth seen in August, combined with the impact of the resurgence in COVID-19 cases, kept the US dollar strong and limited the gains in the precious metal.

Meanwhile, the markets were also very interested in the European Central Bank’s policy decision to trim emergency bond purchases. This provided some support for the European currency, which is a competitor to the US dollar, adding weight to the greenback and giving the yellow metal some extra market traction, as a result.

The 50-period exponential moving average in the 4-hour time frame is expected to prolong resistance around the 1,811 level.

The closing of candles underneath this level indicates that the precious commodity, gold, is being sold. Take a look at the RSI, the most popular technical indicator. It is holding above 50 and demonstrating a bullish trend, which means that the precious metal, gold, is affected by a significant buying tendency today, so let’s look for opportunities to buy above 1,795.13, with a target of 1,809 today. Good luck!