Forex Signals US Session Brief, Jan 2 – Manufacturing Remains in Deep Recession in Europe, Despite a Small Improvement in December

Manufacturing sector is getting smaller in Europe

Markets were quite uncertain what to do after the UK elections and the agreement on the Phase One trade deal between US and China, which will be official soon. After the initial optimism, traders came back with their feet on the ground, realizing that both events weren’t going to change much, hence the quiet price action for a few weeks, leading to the last week of 2019. Cash flows affected markets in the last week and markets turned against the USD, with money flowing particularly towards safe havens, such as GOLD . Today, it seems like markets are trading the sentiment once again, which seems positive, as risk assets climb higher while safe havens have been retreating.

We had the final manufacturing reports being released from Europe today. The figures for December showed a slight improvement, but manufacturing remained deep in contraction nonetheless. Certain ECB members have been pointing to an economic recovery, after some green shoots we have seen in the data recently, but the improvement has been pretty anemic and today’s manufacturing reports show just that. It will be an uphill battle trying to turn the economy around, especially if US tariffs on European manufacturers start this year. 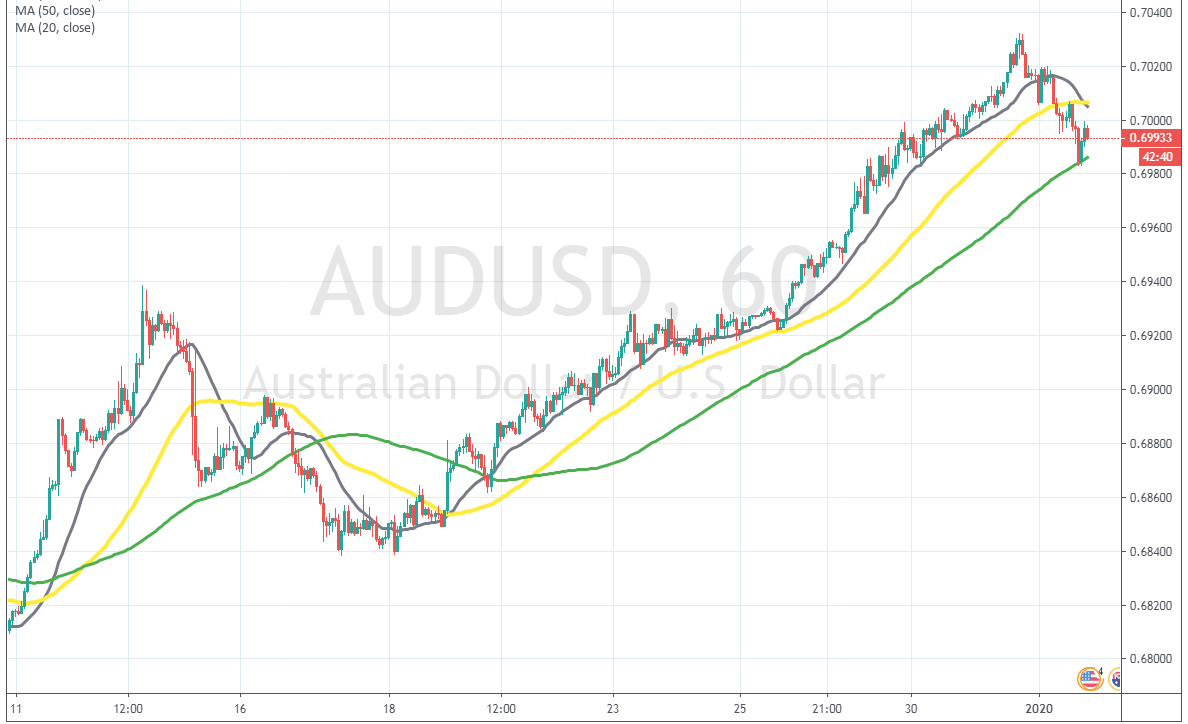 AUD/USD has been bullish since the beginning of this month, as the USD turned bearish, on softer US ISM manufacturing report, which showed that this sector fell deeper into contraction during November. The upside momentum faded and in the third week this pair retraced lower. But, the sentiment improved further after US and China agreed on Phase One deal, helping risk assets, such as the stock markets and commodity Dollars.

Last week, the USD tumbled lower ahead of the new year and as a result, AUD/USD turned even more bullish for about a week. Today though, we are seeing a pullback down in this pair, as USD finds some bids at last. But,t he 100 SMA (green) held the decline on the H1 chart and this pair bounced off that moving average earlier. The price is not exactly running away after the bounce, which has given us some time to open a buy signal now, hoping that the uptrend will resume soon.

After trading the USD last week, as traders adjusted their positions for the new year and multinational corporations moved cash around where they need it, markets have returned to trading the sentiment. The report that China temporarily suspended the Shanghai-London Stock Connect scheme has dented the sentiment a bit, hence the decline in risk assets.