The Euro was first issued as a currency in January 1999, when it opened at 1.1795, and now it is trading at 1.16391. In 2002, the EUR started circulating within much of Europe, and by then, the price of the EUR/USD exchange rate was only 0.8907. In October 2000, the EUR/USD currency pair fell to its lowest historic level at 0.8225. However, after that, the EUR/USD currency pair gradually gained strength, due to the increased popularity of the consolidated Euro currency. The pair crossed back over the 1.000 level in November 2002 and continued the upward trend. However, the EUR/USD pair has traded within a wide range over the years.

The Euro currency has been adopted by 19 EU member states as their national currency. There are many factors that affect the price of the EUR, including the political and economic conditions of EU member states. The prices of the EUR/USD currency pair are affected by several economic data releases and other news related to the two individual currencies. The EUR/USD exchange rate is also considered a riskier currency pair, and the factors affecting the risk-on market sentiment can affect the prices of the EUR/USD pair too. The relationship between the EUR/USD exchange rate and risk-on market sentiment is positive or direct, which means that a rise in one causes a rise in the other and vice versa. 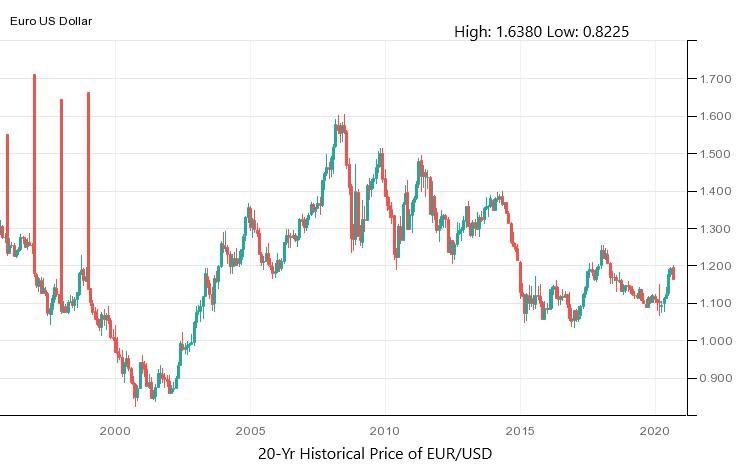 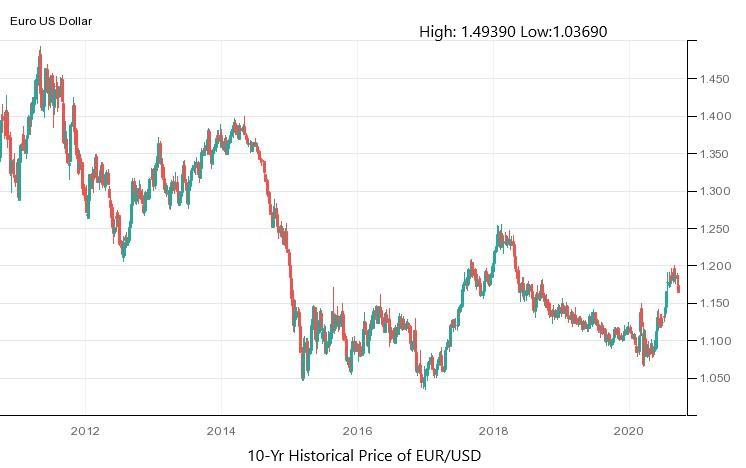 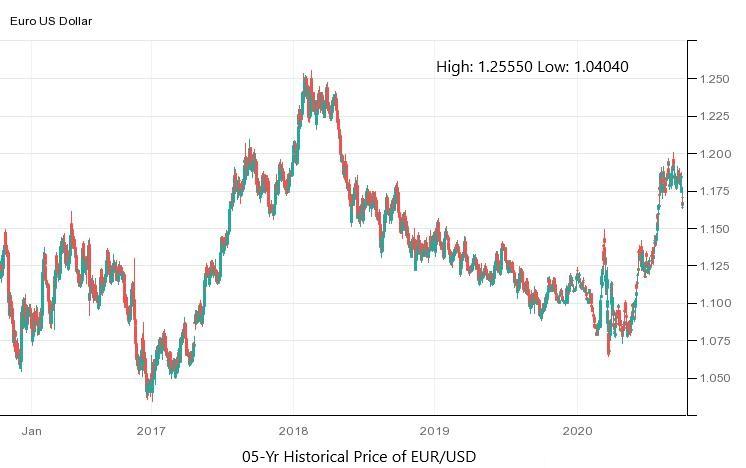 The ECB is the central bank of the Eurozone. It controls the monetary policy of the whole bloc. The ECB's decision-making body is the Governing Council, which is made up of the Executive Board and the governors of the national central banks of the Eurozone member countries. The Executive Board of the ECB has a President, a Vice-President and four other members. All the above-mentioned official EU members and their speeches and comments on the European economy and monetary policy, greatly influence the EUR currency and ultimately also the EUR/USD pair.

Interest Rates:
The ECB uses the short-term interest rate as its refinancing rate to manage the liquidity in the market. The ECB holds a council meeting every other Thursday to announce interest rates. The difference between Europe's refinancing rate and the Fed Funds rate from the United States is also a good indicator of the EUR/USD exchange rate prices. After the first meeting of every month, the ECB also holds a press conference, where it provides its viewpoint on monetary policy and the economy.

Economic Data:
The economic data, such as Employment Numbers, GDP, Trade Balance, Retail Sales, Sentiment Indicators, CPI, PPI, HPI and the Manufacturing & Services PMI from Germany, France, Italy and the United States, all have a great influence on the EUR/USD prices.

Political Factors:
Like all other exchange rates, the EUR/USD pair is also affected by the political instability in the US and European countries, most importantly France, Germany and Italy. Because Germany is the largest economy of the Eurozone, and Russia has a substantial amount of German investments, Russia's political or financial instability also impacts the EUR/USD exchange rate prices.

Coronavirus Pandemic:
The coronavirus pandemic started to spread in the first quarter of this year, causing economies worldwide to shut down all activities, in an attempt to prevent the virus from spreading further. The lockdowns imposed in countries all over the globe caused the economies to fall into recession, as central banks from all countries were forced to introduce more monetary easing and cut interest rates.

The ECB also cut interest rates to almost zero, as did the US Federal Reserve, with the aim of cushioning the damage caused by the coronavirus crisis. The pandemic hit the US economy hardest in the second quarter. Recently, the European countries have been warned by the WHO that the pandemic will result in a high number of deaths in Europe by November, as the rate of infection has increased there. The coronavirus has a negative impact on the European economy and local currency, which is ultimately weighing on the EUR/USD pair.