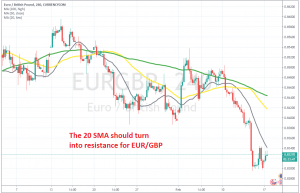 Shorting the retrace in EUR/GBP Below the 20 SMA

EUR/GBP has retraced higher again today, but it seems like Friday's scenario will play out again Full Article
2 d 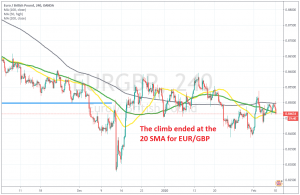 EUR/GBP Reverses at the 20 SMA 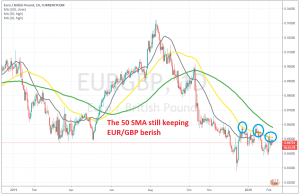 EUR/GBP Tries to Turn Bullish, But the 50 SMA Continues to Keep the Trend Bearish

EUR/GBP has stopped declining, but the 50 SMA is not allowing buyers to push above it Full Article
2 wks 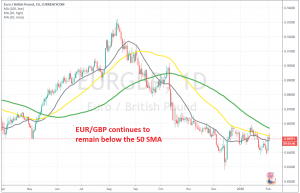 EUR/GBP COntinue the Downtrend, as it Returns Below the 50 Daily SMA Again

EUR/GBP retraced higher yesterday, but today it has returned back down, so the larger bearish trend continues Full Article
2 wks 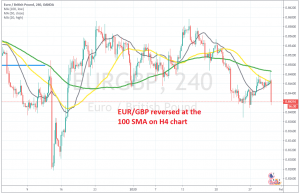 EUR/GBP Reverses Down After a Less Dovish BOE 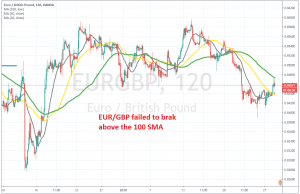 EUR/GBP has broken above the 50 SMA, but sellers returned at the 100 SMA Full Article
3 wks 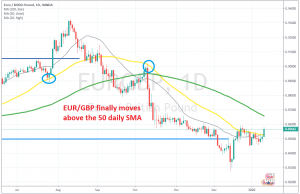 The Trend Might be Changing for EUR/GBP, as it Moves Above MAs

The EUR/GBP pair is the abbreviated term used for the Euro & Great British Pound. the Euro and Great British Pound the, nicknamed as “Chunnel” Before we get into the particulars, what exactly does EUR/GBP rate mean? The exchange rate tells you how many EURO (the quote currency) are required to purchase one Pound (base currency). For example, if the pair is trading at 1.17, it means it takes 1.17 euros to buy 1 Pound`

The euro (€; EUR) is the official currency of 19 of the 28 member states of the European Union. The euro is the second largest and second most traded currency in the foreign exchange market after the United States dollar. The euro is divided into 100 cents.

the Euro vs. the British Pound. This pair describes a cross among the two biggest economies in Europe, the Euro Zone and the United Kingdom. The pair is greatly less volatile than other Euro or Pound based crosses because of the economic closeness and relationship between the two. Changes in monetary policy between the Bank of England and the European Central Bank can make this pair extremely sensitive.

What Determines the EUR/GBP Exchange Rate?

Several factors can impact the EUR/GBP rate valuation, including:

ECB & BOE Monetary Policies: The European Central Bank and the Bank of England control the supply of money in the market, to keep the economy on track. A dovish policy, which is also known as expansionary policy, from either of the central banks, weakens the related currency. In contrast, a hawkish monetary policy (contractionary policy) strengthens the currency.

Economic Events: The movement in the European and England economic events determine the exchange rates. Top of the line economic events includes GDP, Employment Change, Industrial Production, and Consumer Price Index. Better than forecast data increases the demand for related currency and impacts the value of either the Euro or the Great British Pound, causing fluctuations in the EUR/GBP exchange rate.

Correlation is merely a mutual relationship or connection between two or more things.

Positive correlation – The positive relationship merely is when pairs move in tandem with each other.

In the forex world, the GPB/SGD, GBP/AUD, and GBP/CAD currency pairs are positively correlated. It's because all these pairs have a Great British Pound in the numerator. So, any change in the Chunnel will be reflected in these pairs.

The euro is one of the most important alternatives to the U.S. dollar among fiat currencies this is why there is often a positive link between the euro and gold: both assets are negatively correlated with the greenback.

The EUR/GBP is traded in amounts denominated in the US Dollar.