USD/JPY Price Forecast For 2021: Will the Downtrend Last Much Longer?

The JPY has been acting as a safe haven forever, turning bullish when traders and investors felt unsafe and declining when the global economy and the risk sentiment were positive. 2020 was one of the most uncertain and unsafe years in decades, even more so than the global financial crisis of 2008. As a result, the JPY has remained bullish since the last week of March last year, making the USD/JPY bearish as a result, with the downtrend starting after a big roller-coaster ride in February and March. The downside move has been consistent, with moving averages providing solid resistance as they keep pushing the price down, currently by a total of nearly 10 cents.

But, we can’t really attribute this bearish move in the USD/JPY to the safe haven status of the Japanese Yen, because the USD has been declining against everything. In fact, the rally in the EUR/USD or the AUD/USD has been even bigger, which suggests that the decline in the USD/JPY is more of a USD factor than a safe haven rally for the JPY. However, we will take a closer look at the safe haven status of the JPY in the sections below. Anyway, it looks as though the decline might be winding down now, as we head towards the end of the coronavirus period.

Recent Changes in the USD/JPY Price

As mentioned above, the USD/JPY has been bearish for nearly a year, and the weekly and daily charts look quite bearish too. But, the monthly chart looks less dramatic, and it indicates a possible bullish reversal soon. The fundamentals are not very favourable for USD/JPY sellers either, with earnings and household spending declining in Japan for a year, while the US economy, on the other hand, has been expanding at a considerable pace. But the USD hasn’t benefited from this, despite the US being the only major developed economy that is expanding pretty fast at the start of 2021, while all other major economies, apart from China, are heading towards another recession. But this might change now that the FED is hinting at ending the monetary easing cycle, although the situation is still too uncertain at the moment, but if the US doesn’t break up, the odds are for a bullish reversal in Q1 after a one-year decline.

USD/JPY Price Prediction for the Next 5 Years

The Market Sentiment During Coronavirus

Financial markets have been reacting strangely to the sentiment since the coronavirus pandemic broke out in February 2020. Initially, traders and investors panicked when the virus traveled to Europe, which turned the risk sentiment massively dovish. Traders resorted to the USD as a global reserve currency, causing it to surge higher for several weeks. Safe havens, such as gold and the JPY, couldn’t resist the panic, and the surging USD sent them down as well.

But, the situation reversed towards the end of March, and we saw the USD turn from the ultimate safe haven into the most bearish asset out there. This turned all major currencies bullish, including the currencies of the BRICK nations. As a result, the JPY has been gaining against the Buck, and the USD/JPY has been on a constant downtrend. In normal times, as a global reserve currency, the sentiment should be bullish for the USD when the uncertainty is high, but these are not normal times, since the world is changing from both the political and economic perspectives. Anyhow, the JPY, as a safe haven currency, would be even more bullish in normal times, which would still point down for this pair.

Is the JPY Still Benefiting from the Safe Haven Status?

Speaking of safe havens, right now it is not certain whether the JPY is retaining that status or not. Safe haven currencies, such as the CHF and the JPY, rallied during the first 2-3 months of the coronavirus crisis, as traders turned to them for safety. Gold and silver also rallied quite hard, with gold finally breaking the $ 2,000 threshold and making new highs, as it climbed to $ 2,075 in the first week of August. But, the bullish trend ended for the precious metals back then, and they have been declining since August. This raises the question as to whether gold and silver are still retaining their safe-haven status, or if safe havens are in retreat. The global situation is still very uncertain, and the new lock-downs in Europe and the restrictions in North America, are hurting the global economy, yet the precious metals have been falling for several months.

The CHF and the JPY have been gaining against the USD, despite the resignation of the Japanese Prime Minister Shinzo Abe which is keeping them bullish, but their gains haven’t been as large as the rally in risk currencies, which have been benefiting from the weakness of the USD. This suggests that the gains in the safe haven currencies come from the decline in the USD, rather than from their safe haven status. In fact, the decline in the USD index, DXY, since March last year, has been bigger than the decline in the USD/JPY. The DXY has lost 14 points, or 1,400 pips, while the USD/JPY has only lost around 9 cents, or 900 pips. So, calculating the difference, it seems like the JPY has in fact helped to minimize the losses in the USD/JPY, which suggests that the JPY might have lost its safe haven status too. The reason for this strange reaction might be the surfacing of cryptocurrencies as a safe haven market. At a time when no currency or commodity out there is safe, traders and investors seem to be favoring cryptocurrencies as a place to store their cash safely, hence the surge in Q4 of 2020. Bitcoin had surged close to $ 42,000 by January 2021, while Ethereum and other cryptos headed for all-time highs. So, it looks like the safe haven status is changing on a global scale, and the JPY hasn’t benefited much from it during this time, which points to a strong bearish reversal when the USD decline is over.

The Bank of Japan (BOJ) is now in a tough spot; it has actually been there for a while, with inflation and growth having been weak for a long time, but it has gotten worse since the start of the coronavirus saga. While we saw a strong rebound in many developed countries after the lock-downs, the economic recovery in Japan was weak, and in the last few months of 2020, the economy headed down again. Earnings and inflation turned negative in November, and consumer confidence and the economic sentiment remain pretty low. As a result, the Bank of Japan governor Haruhiko Kuroda announced their plan to keep the monetary policy on hold, and extended it by another 6 months, in order to achieve its 2% inflation target.

The Federal Reserve has also used its asset purchases extensively to combat this crisis, initially to calm the turmoil in financial markets and also to help stimulate the economy, which has been performing really well, as almost all indicators show. The FED will probably announce another increase soon, to further help the economic recovery, which is likely to help increase inflation. But we have seen mixed remarks from FED officials lately, suggesting that the next move from them could be to increase or even decrease its quantitative easing program. Chicago Fed President Charles Evans announced that they “are likely to maintain the $120-billion-a-month pace of buying mortgage-backed securities and US Treasuries for a while.” On the other hand, Atlanta Fed President Raphael Bostic said that “he is hopeful that in fairly short order, we can start to recalibrate quantitative easing”. This could imply that the FED might begin decreasing its bond and treasury purchases as early as 2021.

The bond market bounced higher in the second week of January, with 10-year treasury bond yields pushing above 1%. So, it seems like the market is expecting the Federal Reserve to step into the picture sooner rather than later, I would say. The idea behind all this is that markets don’t expect the FED to keep interest rates down at these levels forever.

The break above 1% in treasury yields in the past week, and the end of the US political runoff, will finally allow the FED to come back into the picture, sooner rather than later, and that’s what the bond market is showing. It won’t come in the next few months, but if the FED really hints that they are done with monetary easing after the latest stimulus package, then markets will take this as a shift in the policy, which will be the big reversal for the USD. Fundamentals support a big reversal, so we can expect it to happen at some time for this pair.

The USD/JPY has been bearish in the grand picture, having come down from 260 in the mid ‘80s and declining to 75.70 after the 2008 global financial crisis and the Greek debt crisis that followed, which sent safe havens surging higher and the USD/JPY diving lower. But the trend reversed in 2012 and the price surged around 50 cents higher to 125.7, until 2015. Since then though, the price has been retreating lower, but the retreat seems quite weak compared to the surge, which might as well be a retrace before the next bullish leg higher. The lows are not getting any lower and the technical indicators are providing support for this pair. The 100 SMA (green) turned into support below 100 in 2016, while the 200 SMA (purple) has been holding as the ultimate support since then. Now the price has been trading around this moving average for the last few months, moving above and below it, so this is a decisive moment, and given the way fundamentals are going, there might really be a bullish reversal soon. Although, buyers will have to push above the 50 SMA, which has been acting as resistance since 2017. Further down is the support zone, the big round level is at 100, stretching from 99 to 101, should the 20 SMA be broken. 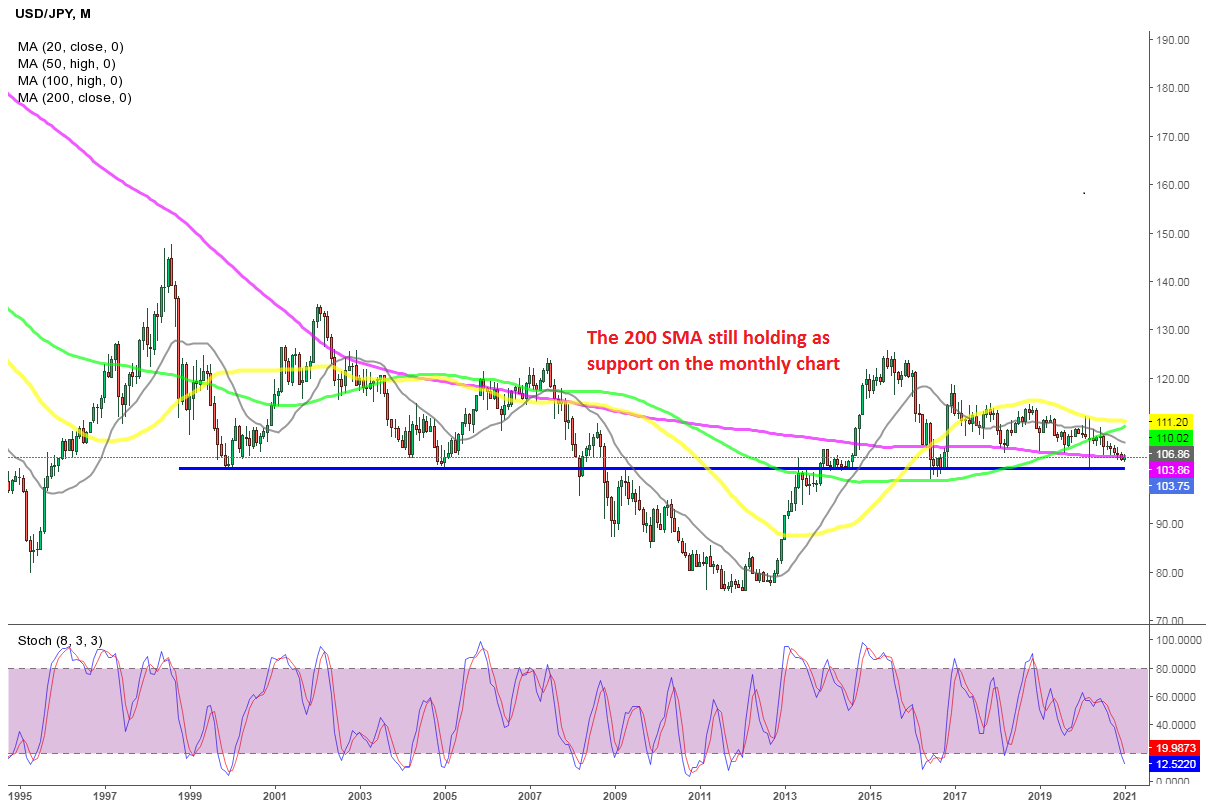 If the support continues to hold, we might see a rebound soon

The weekly chart shows the period of the pullback since 2015, following the 50 cent surge earlier in the last decade, with the 200 SMA (purple) having provided resistance at the top since 2017, pushing highs lower. But, since July 2020, the 20 SMA (gray) has come into place, ending the retraces higher and forming a consistent bearish trend, as the USD has kept declining. However, as we mentioned above, the declining USD against the JPY doesn’t seem as convincing as it is in other pairs. But the 20 SMA is not letting go. In the last two weeks we saw an attempt at reversing the price higher, and a possible break of the 20 SMA, but buyers failed once again and the weekly candlestick is back where it started. So, for now the trend remains clearly bearish on this chart. 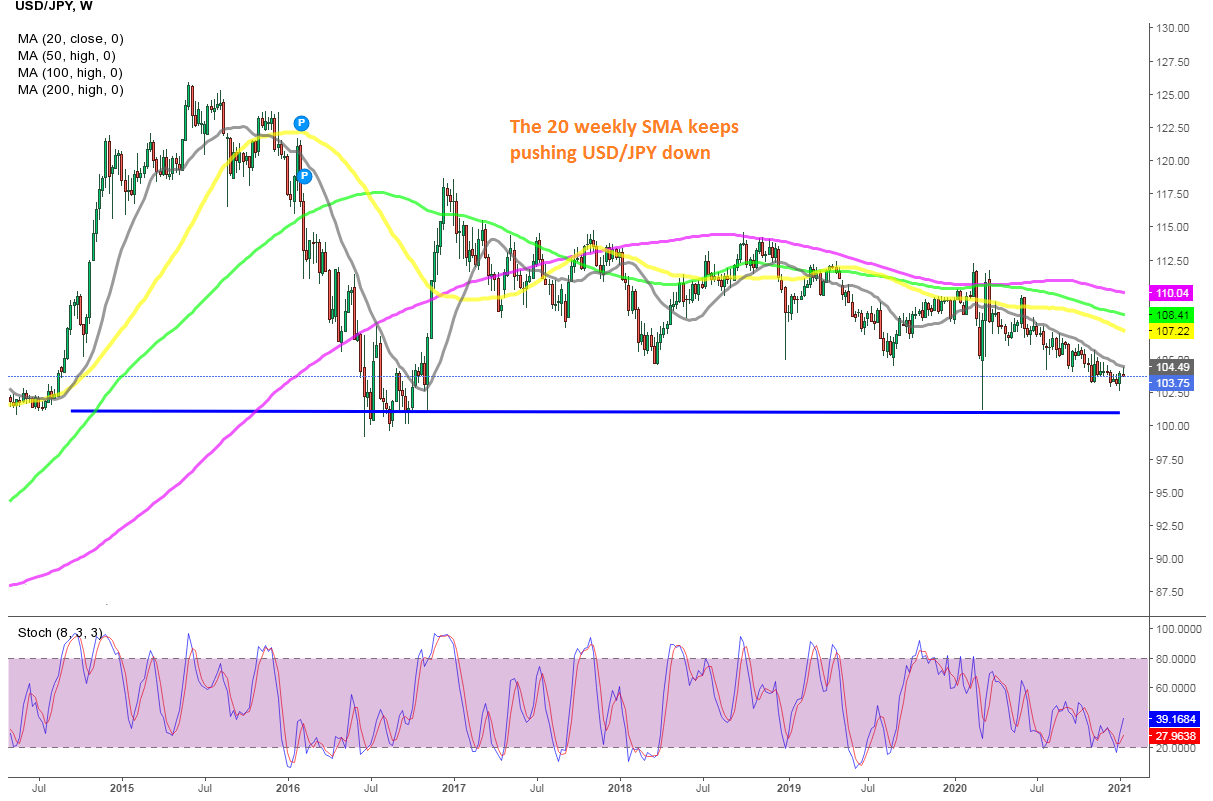 On the daily chart, the picture is also quite bearish, following the roller-coaster ride in February and March last year. During this time there have been quite a few really good selling opportunities at the 50 SMA on this chart. The price was bullish during Q4 of 2019 for this pair, and this continued in the first couple of months of 2020, but after the coronavirus, everything changed. The decline, which started at the end of March, continues for this pair, with the 50 SMA (yellow) being the ultimate resistance here. Late last week, we saw a bullish reversal, and another attempt from the buyers at breaking the 50 SMA, but they failed once again, and the price is heading lower now. So, the downtrend continues in this pair, although the decline is slow and the bullish reversal should come soon, before the USD/JPY reaches the 100 level. 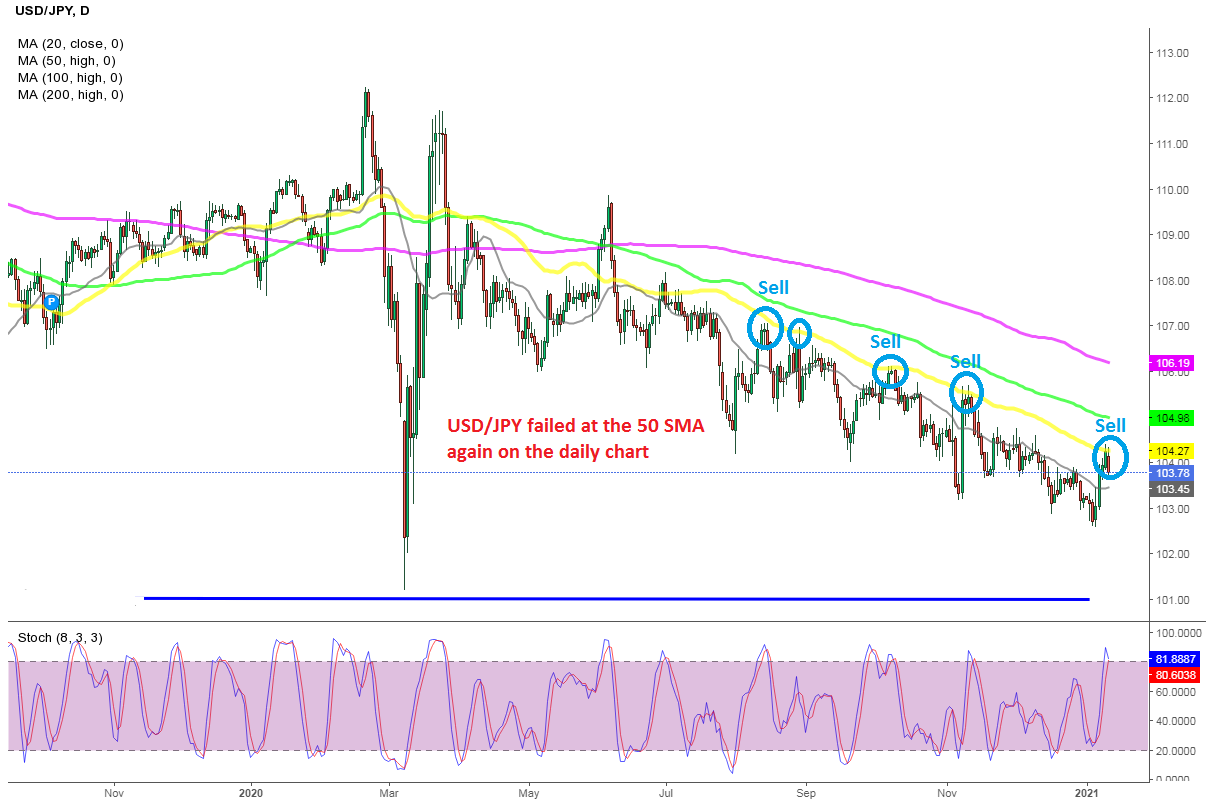