EUR/CHF Price Forecast for 2021: Can It Violate Symmetrical Triangle Pattern on Lower Side?

The two currencies involved in the currency pair EUR/CHF are opposites of each other as Euro is considered a riskier currency and the Swiss Franc is considered a safe-haven currency. So the pair is quite affected by the market sentiment, whether the risk is on or off. The pair has seen some massive bearish trends since early 2018 extended for about two years on the back of a trade war between the US and China. However, since May 2020, the currency pair has reversed its direction and has been moving in a bullish trend since then amid the reopening of economies from around the globe after 2-3 months of lockdowns. The economies around the world were closed down to stop the spread of the coronavirus that resulted in an increased demand for safe haven and supported the Swiss Franc that ultimately added in the bearish trend of the currency pair EUR/CHF in the early months of 2020. However, in May when these restrictions started to lift, the hopes for economic recovery raised optimism in the market, resulting in risk-on market sentiment. This benefited the single currency Euro and lifted the pair upward. Since then, the pair has continuously risen, and the trend has changed to bullish.

Recent Changes in the EUR/CHF Price

EUR/CHF Price Prediction for the Next 5 Year

Since May 2020, the currency pair EUR/CHF has reversed its trend to bullish amid improved economic conditions and hopes for economic recovery. However, the prospects for a reversal of the bullish trend in the short-term are rising day by day amid a risk-off market sentiment and depressing outlook for the European economy. The currency pair might see some pressure in the coming months as the single currency Euro has been declining for the past few weeks over the concerns about economic recovery across Europe, and the decline is expected to persist till the mid of this year. A third wave of the virus has hit Europe, and it has forced many European nations to reinstate lockdown measures to control the spread of infections. These restrictions and sluggish vaccination distribution have jeopardized the economic recovery hopes for the bloc that represents a bearish trend for single currency Euro for the short term. The continued rise in the number of cases could extend the economy’s damage for the long run that would drag the trend for a longer period of time.

On the other hand, Switzerland’s economy is expected to grow in the second quarter of 2021 after declining in Q1 due to health-related restrictions in the region to control the spread of coronavirus. Switzerland is expected to return to its pre-pandemic level of activity in the second half of 2021, and this will be ahead of most neighboring European countries, which would impose a great positive influence on the already high-valued Swiss Franc. The improved outlook for the Swiss economy and the hopes of risk-off market sentiment portray a bullish momentum for the safe-haven Swiss Franc that could weigh on the EUR/CHF currency pair in the future.

The pandemic crisis, fueled by the third wave and new lockdown restrictions in Europe and the delayed vaccine supplies from manufacturers, represents a sluggish economic outlook for the European Union that could harm the single currency till the second half of this year. Furthermore, in the long run, the post-Brexit effects, rising global tensions due to fresh US-China disputes, and third wave of coronavirus could have a negative impact on the currency pair due to increased demand for safe-havens. This shift in the market risk-sentiment to risk-off will lift the safe-haven Swiss-Franc in the coming months that could weigh heavily on the EUR/CHF pair prices.

European Economy– The near-term outlook for the euro area has been weakened by the recent intensification of the coronavirus pandemic in the region; however, it has not yet disrupted the economic recovery. The third wave of the pandemic in the European Union has forced member countries to impose new lockdown restrictions that accompanied fiscal support measures, and indicate a decline in the activity for the first quarter of 2021. The short-term outlook for the economy is dependent on the evolution of the pandemic, lockdown measures, and the vaccination rollout. The containment measures are assumed to be tougher than in December 2020, and they are expected to have more impact on the economy that would take a while to recover from.

The vaccination rollout in the European countries is also not impressive as the sluggish supply of vaccine doses has kept the euro area on the back foot against the vaccine rollout in the US and UK. Both countries are more effective and faster in vaccinating their population than Europe,, which has also added to the sluggish outlook for the region.

It is predicted that the health crisis in the region will end by early 2022, and based on this projection, the long-term bearish trend in euro currency could weigh on EUR/CHF prices. According to ECB President Christine Lagarde, the Eurozone’s GDP is expected to rise to 4.0% in 2021 and 4.1% in 2022, with a decline in 2023 to 2.1%.

Switzerland Economy – For centuries, Switzerland has been one of the world’s wealthiest countries with an efficient market economy. The standard of living, education quality, healthcare system, and industrial productivity in Switzerland have been among the highest in Europe. The Swiss economy faced a sharp downturn, contracting by 5.3% in 2020 due to the coronavirus pandemic. However, the country has managed to recover a little and control the situation that has raised the growth expectations of its GDP by IMF to 3.6% in 2021 and 2.1% in 2022. According to the State Secretariat for Economic Affairs (SECO), the expected growth in Switzerland’s economy in 2021 is 3% and 3.1% in 2022.

The Swiss National Bank expects economic growth in the country for 2021 between 2.5% and 3%. The central bank believes that the growth will decline in the first quarter of the year while it will rise in the second quarter after lifting the lockdown restrictions. The Bank also believes that Switzerland’s economic activities will return to pre-pandemic levels by the second half of 2021 that will lead to economic recovery and hence will exert pressure on the EUR/CHF pair in the long run.

Swiss National Bank – The low interest rate policy of the Swiss National Bank (SNB), and the currency interventions by the SNB over many years, has kept the Swiss Franc one of the strongest currencies in the world. The Swiss Franc is also considered a proxy for gold as it directly relates to the prices of gold due to large gold reserves held by the SNB. Furthermore, the low interest rate policy of SNB has also played an important role in making the Swiss Franc a safe-haven currency. The Swiss National Bank has kept its rates at the lowest level in the world at -0.75% since the beginning of 2015. Besides, it has also continuously used intervention in foreign exchange markets as its main monetary policy tool to depreciate the rising prices of CHF. Unlike other banks, the SNB has used lower interest rate policy and currency interventions as a tool to limit the appreciation of the Swiss Franc as SNB still considers the currency to be highly valued.

The SNB has stated that it will remain using these tools to support its currency and economy whenever it deems necessary. If it decides to intervene in the foreign exchange markets by selling its currency and buying other currencies to depreciate its value in the near future, the EUR/CHF can see a bullish pressure in the long run.

Risk-Off Market Sentiment – The emerging risk-off market sentiment could also upset the EUR/CHF rising prices in the near term. The increasing tensions between China and the United States, the EU and UK, could reverse the sentiment around the market. Although both currencies involved in EUR/CHF currency pair are opposite to each other and change in sentiment of the market will have a little impact on its prices, the risk-off sentiment could raise the demand for safe-haven CHF and harm the prices of EUR/CHF in the short-run.

Recently, the United States, with the coordination of the European Union, Canada, and the United Kingdom, forced sanctions on Chinese officials for violating human rights in Xinjiang Province. Beijing has confronted many restrictions against the human rights issues on Uighur’s Muslims in its North-western region. Conversely, China has dismissed these accusations and has imposed even harder sanctions on European, US, and Canadian lawmakers in retaliation. These rising tensions between China and Western countries could lead to another round of global tensions that could raise the safe-haven appeal in the market and support the Swiss Franc that will eventually drag the prices of EUR/CHF on the downside not only for near-term but could also extend to the long-run.

The EUR/CHF pair is exhibiting bullish bias since May 2020, surging from 1.04993 level to 1.0990 level. On the technical front, the pair is holding above monthly 20 and 50 periods EMA support levels of 1.10800 and 1.10782 levels, respectively. The leading technical indicator, the MACD (Moving average convergence divergence) and RSI (Relative Strength Index), are exhibiting a bullish trend in the currency pair. 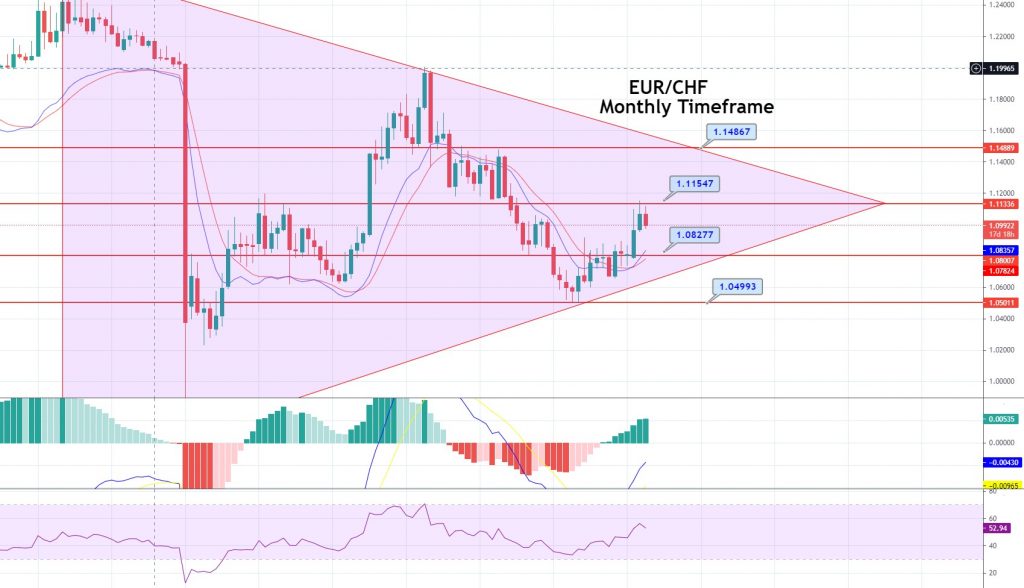 On the monthly time-frame, EUR/CHF has closed a symmetrical triangle pattern that’s keeping it within a wide trading range of 1.1486 – 1.0499 level. We can also see an upward trendline extending support to the pair around 1.08277 level. However, this level’s violation can trigger sharp selling until the next support area of 1.0499 level. Conversely, the bullish breakout of the 1.1154 level can lead the EUR/CHF price towards the 1.1486 level. 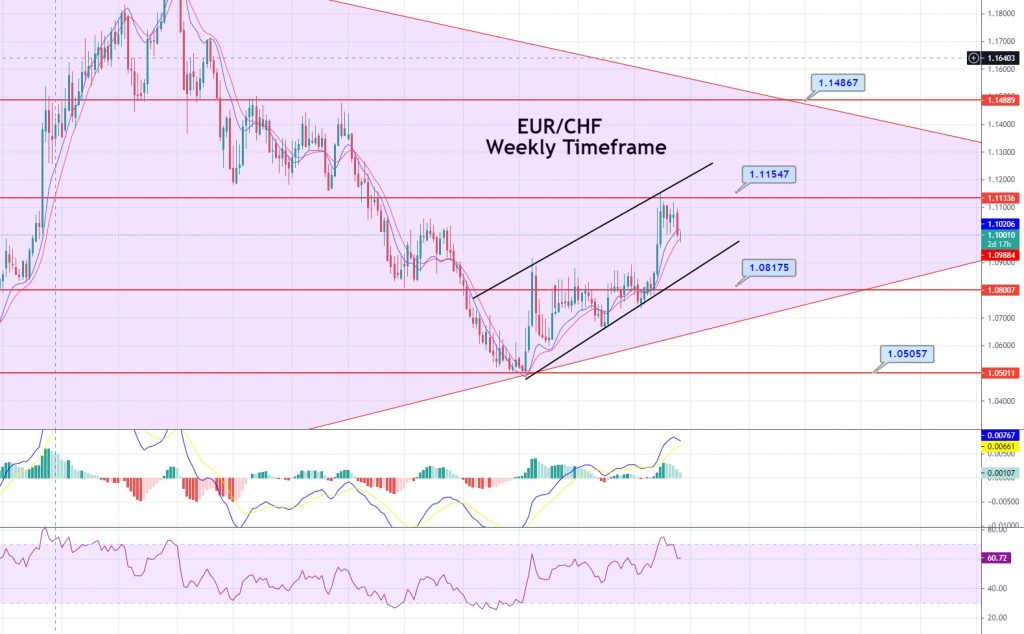 The EUR/CHF pair has entered the bullish zone at  1.1135 level on the weekly timeframe, and it has strong odds of a bearish correction below 1.1135 level now until 1.0909. The series of exponential moving averages are also suggesting chances of a buying trend in the pair. These exponential moving averages are holding around 1.1020 level, suggesting buying opportunities in the pair. The pair may find immediate support at the 1.0909 area, and the violation of this level can lead it towards the 1.0672 and 1.0505 mark. The weekly RSI and MACD indicators support a buying trend; whereas, the pair has also formed an upward channel on the weekly timeframe that indicates strong odds of bullish trend continuation. Therefore, the violation of the immediate resistance area of 1.1126 level can lead the EUR/CHF price towards an initial target level of 1.1310 and 1.1468 level afterward. Good luck!